FINANCE Minister Paschal Donohoe has described comments made in the Dáil on aviation by County Limerick politician Richard O’Donoghue as the most extraordinary he has heard in some time.

Minister Donohoe told Oireachtas members during a debate on climate justice this week that he hoped those who work in Shannon Airport and who depend on a living from aviation in the Mid West, had taken heed of Deputy O’Donoghue’s comments.

The Rural Independent TD ruffled feathers in the Dáil when he hit out at “significant incentives” that he said had been given to the aviation industry despite being carbon exempt.

He also pointed out that it enjoys a “hefty” €634 million tax break through exemptions relating to aviation fuel.

“Airlines receive €2.4 billion through exemptions from excise duty, carbon tax and the National Oil Reserve Agency levy on fuel for commercial and international flights. It would take a year for one acre of forestry to absorb the carbon emissions produced by a one-way flight from Dublin to New York,” Deputy O’Donoghue declared.

He then took aim at Limerick Green Party TD Brian Leddin, stating that in 2019 the airline industry brought 38 million passengers through Irish airports.

“That works out at half a tonne of carbon per passenger each way. Where does this leave agriculture in the context of climate justice?” he asked.

“Farmers care about the environment as much as any other sector does. They have been told that their emissions account for 63 per cent of the total.

“Climate justice is about fair treatment of all people and freedom from discrimination in the creation of policy. The blanket restrictions disproportionately affect young farmers by limiting their ability to enter the sector. They particularly affect those who have recently heavily invested in their business.”

In response to Deputy O’Donoghue, Minister Donohoe said: “The comments he made about aviation and airlines pertain to the industry and the sector – in Shannon Airport and other airports – that we want to rebuild because they are employers, they add value to our economy, they bring tourists into our country, and they generate the access that has been at the heart of our country being able to grow in recent years.

“In particular, few parts of the country understand that more than the Mid West. I hope people there listened carefully to what the Deputy said in this debate.”

Fine Gael Senator Martin Conway also hit out at the Limerick politician’s comments and said that people in the Mid West should be alarmed by his remarks.

“I was dismayed to hear Deputy O’Donoghue’s comments on the airline industry where he listed out the incentives provided to it, while pointing out that they are carbon tax exempt during a debate on the Finance Bill in the Dáil.

“We know the Deputy is opposed to increases in carbon tax, but to make the argument that the aviation sector should not receive certain supports is quite simply extraordinary given that Shannon Airport is in his own backyard,” the Clare Senator said. 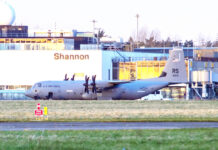