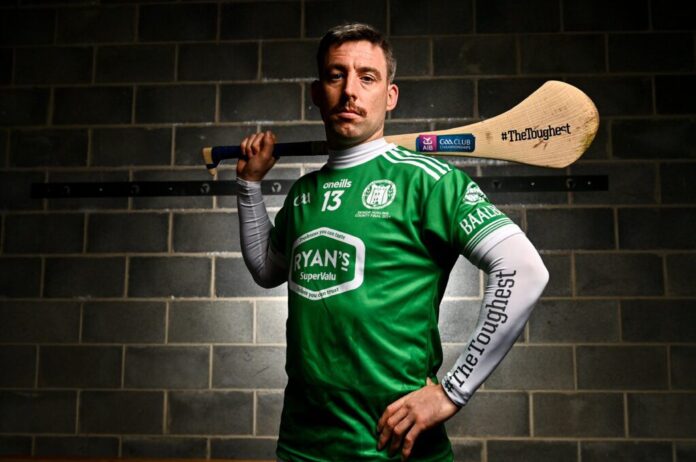 KILMALLOCK star Graeme Mulcahy was speaking at the launch of the AIB Club Championships with the Limerick side preparing for the provincial series they last won in 2014.

“The top players in the game pride themselves in putting in consistent performances.”

Arguably the most consistent hurler in the Limerick championship over the last decade, clipping over seven points in a county final was always a possibility with Graeme Mulcahy.

But in a year dogged with injury, his county final performance was all the more impressive as he helped himself to a fourth county title with the win over patrickswell.

And speaking at the launch of the AIB Club Championships, Mulcahy is eager for more of the same when Kilmallock kick off their campaign in December.

“That county final is just one performance. Any of the top players in the game pride themselves in putting in consistent performances at the top of their game. I probably need to put in back to back performances the next day to show that.”

The Munster club championship will hold fond memories for Mulcahy and co after they were crowned champions for the third time in their last venture into the province in 2014.

With a lengthy wait between the county final and Munster semi-final, the forward says his side are expecting a different sort of game by the time December 12 rolls around.

“It’s been seven years since we won the county in 2014, so it’s great to get back to the Munster club campaign, it’s a special championship at a great time of the year running into Christmas to be playing with your club.

“We’ve got back together in the last week or two and there’s certainly been things that we pinpointed and are focused on going into this. I suppose the time of the year and the conditions will mean it’s probably going to be completely different to the type of game we had a month ago.

“Discipline wise its going to be massive, especially if you’re going to playing against Patrick Horgan or Conor Lehane, the concession of frees will be massive.”

Seven years between titles will feel like a famine to the Kilmallock faithful with just one county final appearance in the years following their All-Ireland final loss in early 2015.

The infusion of youth was a big factor in the Balbec’s ascension back to the top of the pile with the likes of Liam English, Ciaran O’Connor, David Woulfe, Dan Joy, Micheal Houlihan and Oisin O’Reilly all picking up a first county medal.

“These guys (the younger players) ave really stepped it up this year and that’s probably what we have been missing the last few years, the fresh blood to drive it on a bit.

“They have put in a savage year, been so consistent in their performances and that has made all the difference.”

Kilmallock’s opponents in the Munster championship still remain unknown although the South club know they will have home advantage when Glen Rovers or Midleton visit next month.

Watch the interview in full with Mulcahy below.

Mulcahy was speaking at the launch of this year’s AIB GAA Club Championships and AIB Camogie Club Championships, that will see AIB celebrating #TheToughest players of all: those who don’t quit, who keep going and persevere no matter what.