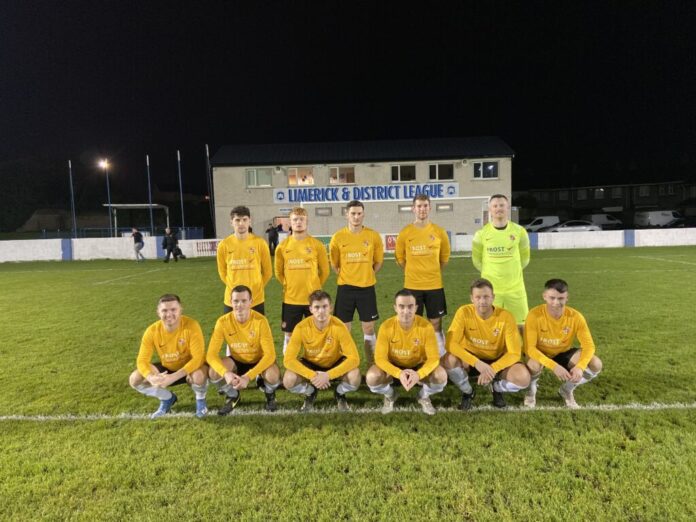 AISLING Annacotty advanced to the semi-final stage of the Tuohy Cup with a narrow 0-1 victory over a dogged Mungret Regional side at Jackman Park on Thursday night. Blake Curran’s second half strike was the difference between the two sides in a keenly contested tie.

With sporadic action for Mungret in recent weeks and no action in a month for Aisling, there were signs of rustiness in possession from both sides in the opening half of the game. Shane O’Hanlon started with a 4-2-3-1 formation with Liam Quinn supporting Shane Clarke. Mungret played in a similar shape with the recently returned Declan Cusack partnering Daragh Killian in midfield while Pa Ahern played close to Evan Barrett.

Without the recently departed Colm Barrett who is currently undertaking studies abroad until the new year, Aaron Long was partnered by natural full-back Conor Myers in defence. In the opening exchanges, the duo dealt very well with the threat of Shane Clarke with the former Janesboro man mustering a weak header from a Tony Whitehead cross which was easily gathered by James Roche.

On 18 minutes, Richie Burke’s side had a great chance to take the lead when a long ball was headed away by goalkeeper John Mulready under pressure from Killian and when the ball fell to Ahern, his weak lob was easily gathered by the backtracking Sixmilebridge native. In a game of few chances, the best of the half fell to an unlikely source in Annacottty left back Killian Maloney whose low drive from the edge of the box was brilliantly saved by Roche with Adam Foley hitting the side netting from the rebound.

Aisling emerged as a more purposeful side in the second half and should have taken the lead 5 minutes into it as Shane Stack beat the offside trap and was fed by Quinn but the winger’s shot hit the post and was cleared to safety.

Moments later, Shane O’Hanlon’s side grabbed the all important opener as Blake Curran received possession on the edge of the area before cutting inside Craig Prendergast and blasting beyond Roche. 2 minutes later, Aisling should have extended their lead as Quinn headed a Shane Tracy cross into the ground and the ball somehow managed to hit the crossbar and travel over.

Although it was all one way traffic at this point, Mungret should have equalised just before the hour mark when Kian Barry headed the ball into the path of the onrushing Ahern who outpaced Murphy and Whitehead but Mulready denied the Rathkeale striker. From the resulting corner, Evan Barrett’s flick was cleared off the line by Murphy with Mungret claiming a goal.

With time running out, Mungret made several attacking changes in an attempt to equalise and forced numerous dangerous corners but were unable to capitalise on some shaky defending. Annacotty had introduced substitutions of their own and it was two of these subs who combined when Brian Donovan played David O’Mahoney down the line and the midfielder cleverly squared the ball to Clarke but Roche was quick to deny the striker.

In the dying moments, substitute Markus Finucane fashioned a late shot at goal for Mungret but it was easily saved and referee Robbie Broe blew the full-time whistle.

Aisling Annacotty manager Shane O’Hanlon was pleased with his side’s performance having not played in a month but was also relieved to gain the victory in a tight affair.

“Mungret have come on a lot. They had three or four very good chances over the course of the game. I was happy with our performance as well as the lads have been off for nearly four weeks and it was a good game for us. It was a competitive game and there wasnt much in it.”