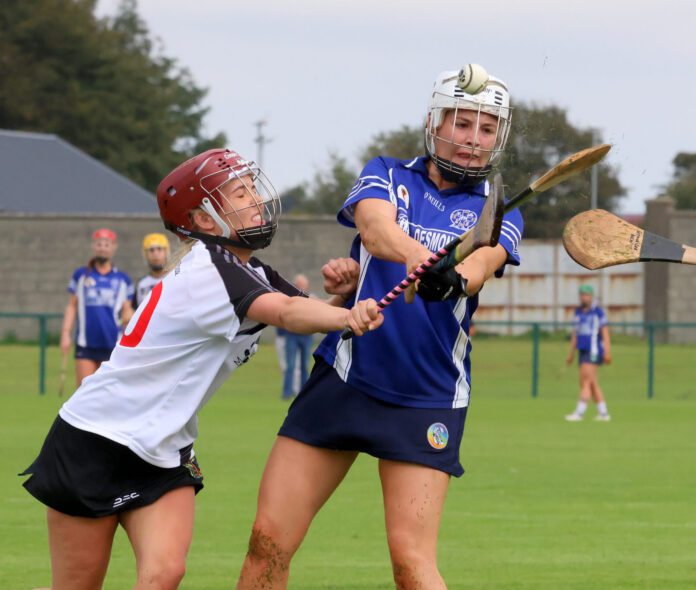 Iris Kennelly’s second half goal was one of the main differences between the sides as Newcastle West reversed the result of the 2020 final where Killeedy triumphed.

In the end the margin was four as Newcastle West won 1-9 to 0-8, first taking the lead in the 13th minute and maintaining it to the final whistle.

Killeedy were the first off the mark with Aine Cunningham opening the scoring. Marion O’Connell doubled the lead after ten minutes.

But Newcastle West hit four in a matter of minutes to take control heading into the first waterbreak, Rebecca Delee bagging a double as Karen O’Leary and Roisin Ambrose also found the target.

Delee and O’Connell exchanged frees to start the second quarter with the former getting the final score of the first half to give the Magpies a 0-6 to 0-3 lead.

Delee had NCW’s first off the second before Aisling Scanlon replied for the defending champions.

But the next score was the crucial goal as Iris Kennelly fired to the net for daylight between the sides. Delee added her sixth of the afternoon as Aine Cunningham replied with the final score of the third quarter.

Scanlon made it a four point game but Delee replied for Newcastle West.

Killeedy pushed hard for a late goal but the Newcastle West rearguard held strong as they claimed their second title in three years, avenging the 2020 final loss.

And for many on the team, it was a second senior title in a week, adding to the win with Monagea in the Senior Football championship.

Earlier in the day, Monaleen and Cappamore played out a draw in the Intermediate Final. There was nothing to separate the sides at the end of the hour as they finished 2-3 to 1-6.

Monaleen had the first two points of the day but an Elaine Berkery goal for Cappamore pulled them ahead after ten minutes.

But at the waterbreak it was all square at 1-1 to 0-4, with the teams still level at the short whistle.

Lisa Leonard goaled shortly after the restart as Cappamore moved three clear of their opponents.

Monaleen reduced the deficit marginally to 2-2 to 0-6 by the final break of the afternoon, failing to capitalize on their dominance.

Cappamore made it a three point game but with injury time approaching, Saoirse Fitzgerald found the roof off the net to force a replay which will be confirmed in the coming days.