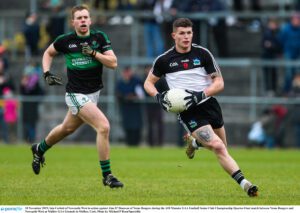 NEWCASTLE West, Kildimo Pallaskenry and Mountcollins will all begin their Munster Club championship campaigns on the weekend of December 4/5.

All three Limerick representatives in the Munster club football championship know the identity of their provincial opponents after the Waterford Senior and Tipperary Junior Championships concluded at the weekend.

Newcastle West will enter into the Senior Championship for the third time since 2015 as they take on the Waterford Champions. The Nire claimed yet another title, this time at the expense of Rathgormack, their fourth title in eight years. The Nire beat Adare in the quarter-finals in 2018.

Newcastle West have been beaten at the quarter-final stages in their previous two trips into the provincial championship, losing to the eventual winners on both occasions. In 2015 they were beaten by 0-12 to 1-7 against Clonmel Commercials before falling to a 1-9 to 0-9 defeat at the hands of Nemo Rangers in 2019.

Newcastle West will hold home advantage in their quarter-final.

Dromcollogher Broadford were the first and only Limerick team to claim Senior Munster honours, winning the championship in 2008

In the Intermediate Championship, Kildimo Pallaskenry will travel to Clare to take on Corofin who won the the Banner title over the weekend with a 2-12 to 2-10 win over Kildysart.

This will be KP’s second venture into Munster in three years as they lost out to Dromtarriffe in the Junior A Championship quarter-finals in 2018.

Adare and St Senans reached the Intermediate final in successive years in 2016 and ’17 but both lost out to Kerry opposition.

Mountcollins will represent Limerick in the Junior Championship after beating Croom in a play-off. Both sides lost their respective County semi-finals with Fr Caseys second team unable to enter the competition.

The West side will take on Ballina in the Munster quarter-final after the Tipp team beat Knockavilla Donaskeigh Kickhams on Saturday in the county final.

Glin were the last Limerick team to reach the decider when they lost out to Kerry opposition Brosna in the 2014 final. It was the third successive year that Limerick teams were beaten by Kerry in the final with Feohanagh Castlemahon and Cappamore losing in ’12 and ’13. Mountcollins competed in the 2009 junior championship, reaching the decider before losing out to Castlegregory.

The Senior, Intermediate and Junior A Munster hurling championship finals will be played on the weekend of January 15/16.