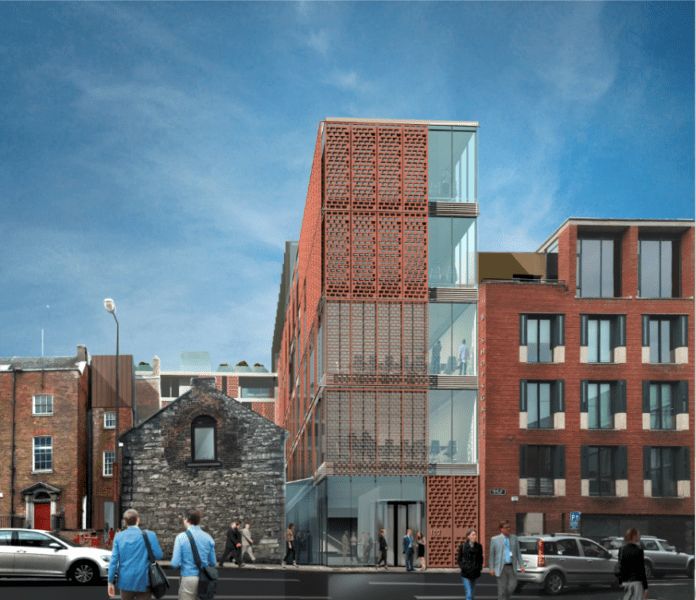 THE sod has been turned on an €80 million nine-storey glass tower block of luxury apartments and gold standard office space in Limerick City, backed by multi-millionaire Lord of the Dance, artist, and award-winning actor, Michael Flatley.

The riverside development by Kirkland Investments, creating 150 construction jobs, as well as the potential to house up to 600 office workers, will position Limerick City as a “resilient” and attractive “post-pandemic” location for new investment, the company said.

Kirkland chairman Rudi Butler, said the development, christened ‘1BQ’, an acronym of its location at 1 Bishop’s Quay, will “significantly transform” the city along the banks of the River Shannon.

It will consist of 110,000 sq ft of high-spec office space, 34 high-end apartments, retail space, and over 100 underground car spaces.

“With cities vying to become more resilient post-pandemic, 1BQ has the potential to house 600 employees, supporting Limerick to attract further foreign direct investment from multinationals, whilst also strengthening housing and hospitality for both city residents and tourists,” Kirkland stated.

The complex will incorporate “the principles of near zero emissions buildings and highest standards of energy saving”, while implementing “renewable technologies, heat pumps and heat ventilation systems”.

Mr Butler acknowledged it is an “ambitious development” but said Kirkland have been “purposely measured” in its approach to the scale of the project.

Kirkland has downsized the development, having initially secured planning permission from Limerick City and County Council for a 15-storey block, despite objections from local residents, business owners, and the Irish Georgian Society.

Ciara McCarthy, of Cushman & Wakefield commercial agents on 1BQ, argued that, “despite the changing structure of work as a result of the pandemic, there is demand for premium office space as companies look to adopt the hybrid approach to working”.

“Employers want to attract talent, and office space surroundings are a key part of this,” Ms McCarthy said.

When previously asked about speculation Mr Flatley was a silent investor in the development, a spokesperson for the Riverdance star replied: “Mr Flatley is fully supportive of Mr Butler’s plans for Limerick.”

When pressed further on whether Mr Flatley had invested funds in the development, his spokesperson said Mr Flatley had no comment to make “regrading his involvement”.

Mr Flatley has property interests all over the world including in London, Barbados, New York, Chicago and Villefranche-sur-mer in the south of France. He also creates unique artworks – painting with his dancing shoes – which have sold for hundreds of thousands of euro.

Last year the Chicago-born entertainer vetoed a plan to sell his renovated palatial property Castlehyde, in Fermoy, Co Cork, having put a €20 million guide price tag on it, stating he was too emotionally invested in it after he had pumped €27m into renovating the mansion and surrounding estate.

Rudi Butler is the only named investor in Kirkland Investments Ltd. The firm’s latest available financial accounts, year ended December 31 2020, show the company recorded profit for the year of €2.9m, compared to €13.4m in 2019, along with net assets of €66.4m, and €89.5m in net current liabilities.

Rudi Butler’s father Robert Butler, whose Robert Butler Group lost a large chunk of its property empire (15 properties) when its loans were taken over by the National Asset Management Agency in 2012, is named in company records as a non-shareholding director at Kirkland, as is Hugh Conor Sexton.

A third non-shareholder director Charlotte McNamara resigned from the company on  March 2 2021.

Following its launch in 2013, Kirkland acquired a number of assets including two hotels – the Premier Inn, a 155-bedroom three-star hotel at Airside Business Park beside Dublin Airport, for €11m; and the 94-bedroom five-star Savoy Hotel, Limerick, along with 84 adjoining apartments and six commercial units for €18.54m.