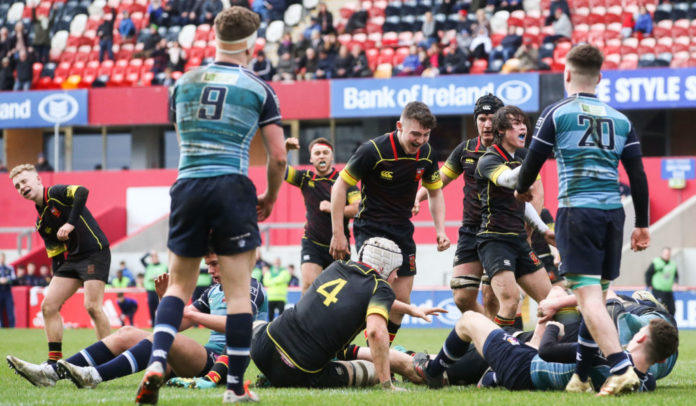 THE Munster Schools Senior Cup trophy has been named the Garrett Fitzgerald Cup as a fitting tribute and acknowledgement of the former CEO’s contribution to the schools’ game in the province.

Fitzgerald, who passed away in February 2020, was at the helm of Munster Rugby for twenty years and prior to that held numerous coaching roles across schools, club, and representative sides.

As a player he won a Munster Schools Senior Cup with CBC in 1971 and later coached the school to a total of five Munster Senior Cup titles guiding teams during a highly successful period when claiming four successive Senior Cups from 1997 to 2000.

CBC remain the only school to hold this honour having previously achieved the feat in the 1970s.
Garrett’s wife Áine O’Donnell and daughter Megan were on hand last week to attend an honorary event at the school recognising the four-in-a-row success and fittingly the Schools Senior Cup from that period, and the now christened Garrett Fitzgerald Cup, were both on display.

“Having this historic cup named after Garrett is a lovely tribute to what he achieved and to remember what the schools’ game, and the grassroots game overall, meant to him.

“He was a huge believer in young people and wanting them to reach their potential. Winning this cup recognises excellence and achieving one’s potential and having Garrett’s name associated with it is a huge honour.”

The group stage of the 2021/22 Senior Cup concluded yesterday with the Limerick teams still in contention.

Castletroy College face the B school qualifier while Rockwell College take on Glenstal Abbey in the preliminary round games in January.

The winners will join the six remaining schools vying for the Senior Cup trophy.