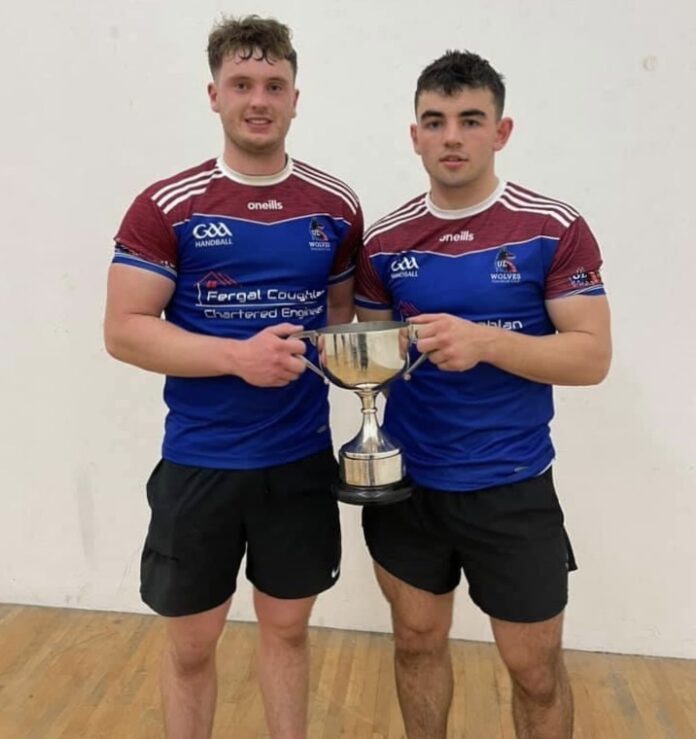 Collegiate Handball has returned for the UL Wolves, sweeping gold at both Men’s and Women’s events at the ICHA tournament last weekend in various venues across county Clare.

This being the first tournament back since their trip to Austin, Texas in 2020 and the Covid-19 pandemic, the UL contingency were ready for a busy and intense schedule of games and were determined to bring back some silverware.

Preliminary rounds took place on Friday with Saturday being the busiest in the lead up the finals.
After some outstanding games across all divisions, the scene was set for the finals that evening with
UL contesting both Open grades and the Men’s and Women’s A grade also.

Aoife Hurley and Dearbhail O’Keefe lost out at the semi-final stage to finalists Fiona Tully and Ashling
Mullin of NUIG in the Open grade.

However, favourites Niamh Heffernan and Sinead Meagher of UL cruised through their side of the draw in the Open competition with a comprehensive win over DCU in the semi-final securing their place in the final against close rivals Fiona Tully and Ashling Mullin of NUIG.

The girls performed well across all aspects of their game, with good power serves and killing of the ball, ultimately proving too strong for the NUIG pairing winning in 2 straight games, 15-6, 15-8.

The second final of the night saw Tadhg O’Neill and Mark Rodgers take on UCD’s Brian Mahon and Diarmuid Mulkerrins in the Men’s Open Final. Despite a busy schedule of games over the course of the weekend, the UL pairing produced a dominant and strong performance outplaying their opponents to win 15-2, 15-2.

Sean Coughlan and Nigel O’Callaghan of UL, fell short of securing their spot in the Men’s A semi-final
losing out in the quarter final stage to the eventual winners from MTU Shane Murphy and Gearoid
O’Connell. It was a well-matched game with the UL pair taking the opening game. The second game
was hard fought, and the MTU pairing came out on top to force a tiebreaker in which UL lost out on
a score line of 15-14.

Aoife Guildea and Aisling Shanahan played extremely well to reach the final in the Women’s A
competition. Unfortunately, on this occasion they were unsuccessful and lost out to a more
experienced pairing from UCD.

UL also had some strong performances throughout the weekend from Barry Greene and Keith
Crehan in the Men’s C, along with Henry McGrath and Fionn Slattery in the Men’s A.

Overall, the weekend was a great success with all of UL Wolves players showcasing great skill and determination throughout all grades and proudly represented the University of Limerick. Credit to the ICHA who organized the event and ensured everything ran smoothly while implementing all Covid-19 guidelines.

The Limerick students will now begin preparations for the 40X20 Singles in Belfast this coming January, which is perhaps the most prestigious event on the Intervarsity calendar. UL Wolves will now be seeking to replicate the skill and winning attitude displayed at the weekend.