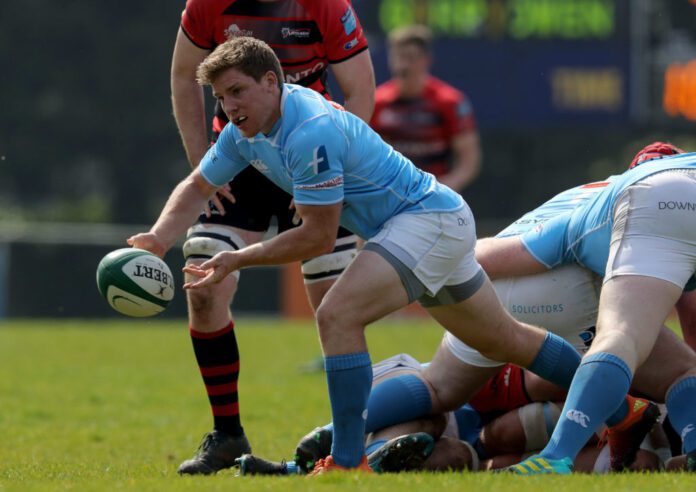 LIMERICK’S Garryowen and Young Munster have relinquished the top spots on the Division 1A table, as Dublin’s Clontarf and Lansdowne hit their stride.

Limerick’s Garryowen have suffered their second loss in their last two 1A fixtures, with visitors Lansdowne breezing past Garryowen 29 – 5 in Dooradoyle. Garryowen’s Colm Quilligan scored a first half consolation try for the men in blue.

Young Munster travelled to the capital to take on Dublin University at College Park. The Cookies were shown red on the stroke of half-time, forcing them to play the final 40 minutes with 14 men. The one sided fixture saw Trinity run in five tries, dwarfing Evan Cusack’s lone penalty.

Defending champions Cork Constitution make their way into the top four of 1A for the first time this year, after their win over Ballynahinch. Rob Jermyn, Aidan Moynihan and John Forde scored tries for the Cork side and Moynihan kicked two conversions.

Con battled back from 10-5 deficit at half time to beat bottom of the table Ballynahinch 19-17 at Ballymacarn Park, a result that sees them move up to third place after their slow start to the campaign.

In other action around the AIL, the Caolan Dooley led Terenure College continued to build on their momentum with a win over UCD in Belfield. The 20-12 result is now Terenure’s 4th win of the season, with their current form forgiving their slow start to the season.

UCC fell short to visitors Clontarf at the Mardyke. The students were awarded a penalty try and substitute John Willis dotted down in addition but it wasn’t enough to fend off table topping Clontarf.

Take a look at the current 1A standings below: