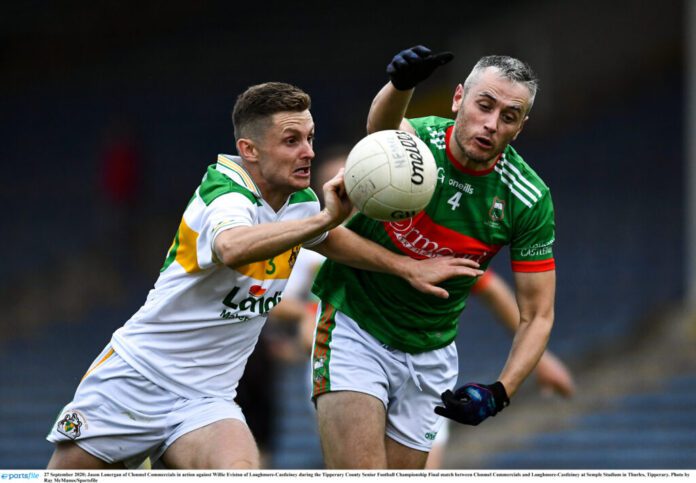 THERE are two games down for decision in the Munster SFC this weekend.

The Munster Senior Football Championship returns this weekend after a year hiatus. The 2020 championship was scrapped with all but the Kerry champions confirmed ahead of the start of the this year’s competition.

Newcastle West booked their place in late October with Eire Og of Clare following suit a week later. The Nire were the third team to advance with Loughmore Castleiney and St Finbarrs winning their respective county championships a fortnight ago.

The Kerry representative will be confirmed on Sunday with Kerins O’Rahilly’s meeting Austin Stacks in the decider.

Ahead of the start of the championship, each team is ranked below.

First and foremost, it must be said that Loughmore Castleiney are one of the most extraordinary clubs in the GAA. Not only did they secure a Tipperary senior championship double over the weekend, they did so playing a championship game for 17 successive weekends which included a replayed final in the hurling.

But such is the toil that playing so often will have on the body and the huge turnover in players, they will surely be hampered ahead of Sunday’s game with Eire Og.

However, they did overcome the odds in the Tipp final where they beat 2015 Munster champions Clonmel Commercials. That was a third consecutive single point win, highlighting the never say die attitude in the club.

Anyone that has bet against the McGrath’s and co this year has been proved wrong and they will be keen to do so again, continuing in Cusack Park on Sunday.

Éire Og captured a first Clare title since 2006 when they outlasted perennial Munster contenders Kimurry Ibrickane in early November. In that contest, five of their six forwards got on the scoresheet showing their array of scoring options.

Interestingly, Éire Óg were beaten in the group stages of the Clare championship by Clondegad, who would contest a pair of relegation deciders.

They were relatively comfortable in the knockout stages, having four points to spare over Ennistymon, six against St Breckens and five in the final.

The side is backboned by Banner players with Ciaran Russell, Darren O’Neill and Gavin Cooney all lining out in Clare’s loss to Kerry earlier this year.

They will hold a huge advantage in terms of recovery against Loughmore but this young side have no experience in the Munster championship as they prepare for the provincial series for the first time in fifteen years.

Should they win, they will move into the semi-finals where St Finbarrs await.

While they will fancy their chances against Newcastle West such is their recent record in the competition, the Nire are slight outsiders with the bookies ahead of Saturday’s clash.

The Nire claimed a tenth ever Waterford title and fourth in seven years when they held off a late comeback from Rathgormack in the Deise final a fortnight ago.

They have a healthy sprinkling of intercounty players with Sean Boyce, Dermot Ryan, and Dylan Guiry all featuring in Waterford’s Munster championship loss to Waterford in June. Intercounty hurlers Conor Gleeson and Jamie Barron have also shown their ability with the big ball.

The Nire also have recent Munster championship experience, beating Limerick opposition in 2018 and contesting finals in 2016 and ’14.

But against the fanatic Newcastle West crowd, they certainly will have their hands full.

Newcastle West were the last team left standing in Limerick after dethroning Adare in a below par SFC Final five weeks ago.

But in the final quarter, the Magpies showed exactly what they’re about as they combined tough defence with flowing attacks as they outscored their opponents 1-4 to 0-1.

Their strength in depth in unrivalled in the county as they were able to leave the likes of AJ O’Connor, Diarmuid Kelly and the Foley brothers on the bench to start the county final.

After such near misses in 2015 and 2019 where they pushed the defending champions all the way, they will be desperate to pick up a Munster win this Saturday as they welcome the Nire.

And with home advantage, there is a huge opportunity for Newcastle to do just that.

It is impossible to separate the Kerry sides who meet in the final this Sunday in Austin Stack Park. Both sides had to work extremely hard to come out in top in their respective semi-finals, Kerins O’Rahilly’s seeing off 2018 Munster champions Dr Crokes by a point as Austin Stacks needed penalties to beat St Brendans.

And while Kerins’ win over Crokes was slightly more impressive, Stacks dethroned the star studded East Kerry in the first round.

KOR are headlined by the presence of All-Ireland winning duo Tommy Walsh and David Moran while Stacks can call upon Kieran Donaghey.

Stacks were Munster champions in 2014 while KOR lost the final in 2009.

Very difficult to call and hard to see past either whoever comes out on top.

One advantage that St Finbarrs hold over the Kerry champions is that they are assured of their place in the Munster series. The Barrs beat Clonakilty by a pint in the Rebel decider last week to book their place in Munster for the second time in four years.

In 2018, the Barrs were comprehensively beaten by Dr Crokes in the Munster semi-finals and they will be desperate to rectify that when they face either Eire Og or Loughmore.

They do have experience of winning the Munster championship but that win came back in 1986, their fourth title in seven years that has them third on the roll of honour.

In Ian Maguire they have one of the games premier midfielders and full forward Steven Sherlock is on fire with 3-41 in just six games this year.

The team to beat, for now.

The post Power Rankings | How do Newcastle West compare to their Munster SFC rivals? appeared first on Sporting Limerick.