Home Sport Gaa WATCH | “We will focus on our own game” | Kildimo Pallaskenry... 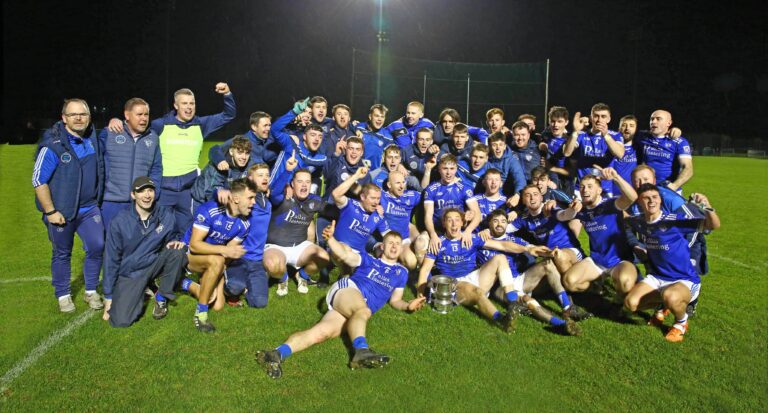 KILDIMO Pallaskenry will be in Munster action, just over five weeks since they were crowned Limerick Intermediate champions.

This Sunday Corofin will host Kildimo Pallaskenry in the Munster Intermediate Football Championship quarter-final at 1pm.

KP won a maiden Intermediate title in late October, disposing of Rathkeale in the final while Corofin left it late to snatch a win against Kildysart in the Banner decider a week later.

With both sides facing lengthy waits prior to the provincial series, Kildimo Pallaskenry manager John Chawke says the teams are evenly matched in all aspects.

“They’re good, they’re fast. They have a very fast inside forward line. They’re like ourselves, they have a never say die attitude and they proved that with the two late goals. They have Jamie Malone, intercounty football, he was carrying an injury so I’d say he’s fairly fresh now heading into the game.

Kildimo Pallaskenry’s win over Rathkeale ensured dual senior status in the club for the first time ever for 2022.

And after juggling both codes throughout the county championship, Chawke say’s it has been great to be able to focus on the big ball over the last month.

“It’s been great. We have a clear road now so hopefully if we win we will be out two weeks later. It’s great that break away from the senior hurling and if it was the other way around I’m sure it would be the same. just to be able to concentrate on your own guys, especially with injuries and all that because the workload is so big when you’re going every week. So yeah, great to get a bit of freedom.”

Kildimo Pallaskenry take on Corofin in the Munster Intermediate Football Championship quarter-final this Sunday in Corofin at 1pm.

The post WATCH | “We will focus on our own game” | Kildimo Pallaskenry manager John Chawke ahead of Munster IFC appeared first on Sporting Limerick.