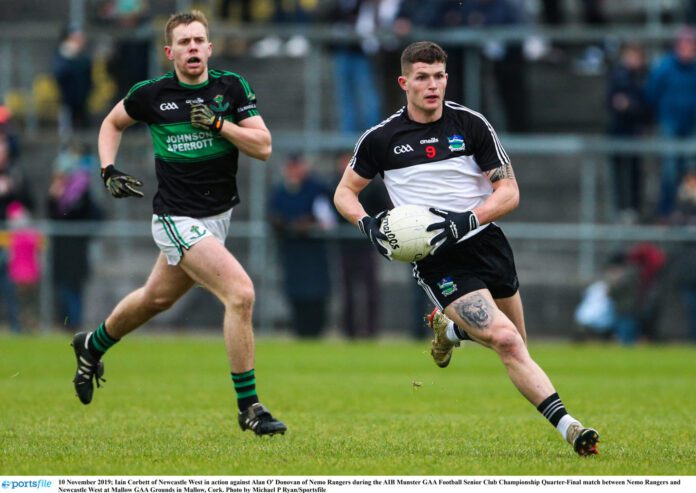 NEWCASTLE West will face Kerry opposition in the semi-final.

Newcastle West were made to work for a first Munster championship win this century as they held off the Nire at home this afternoon.

In the end, the margin was 0-8 to 0-6 with Eoin Hurley scorer in chief for the Magpies finishing with five frees.

The Nire got off the mark through Dylan Guiry befofr Epin Hurley kicked Newcastle West level.

Shane Ryan had the only other score of the first quarter as the Nire held a slender lead at the waterbreak.

The Waterford champions moved two clear after the restart before NCW started to find their rhythm.

A pair of Hurley frees had the sides level before Mike Mcmahon fisted over for their first lead after 30 minutes.

But the Nire had the final score of the half to leave it all square at 0-4 apiece.

The Nire retook the lead inside four minutes of the second half but Hurley was on hand to level.

The visitors again took the lead on 37 minutes before AJ O’Connor found the reply.

A Hurley free after 43 was the final action of the thurd quarter with Newcastle leading by a point at the waterbreak.

With time running out, Seamus Hurley suffered a dislocated elbow that saw a lengthy delay.

From the next attack, the Nire broke through the NCW defence but Andrew Ruddle stood firm to seal Neecasrle West’s pasaage.