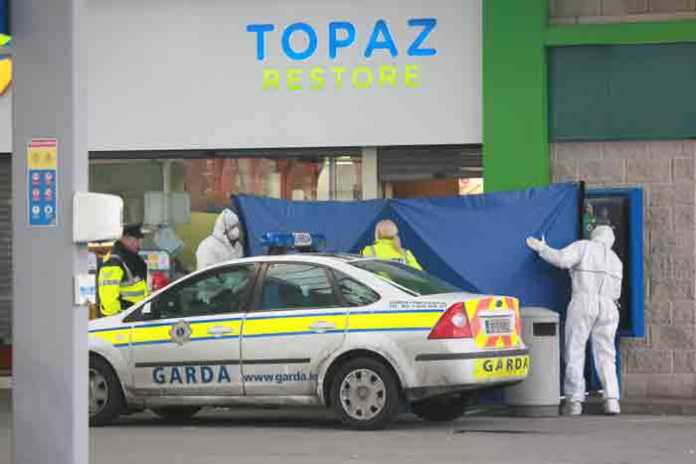 A Limerick woman who developed nervous shock after witnessing a man being shot dead at her workplace, has been awarded €33,000 damages in the High Court.

Theresa Quinn, (35), formerly of Killeely, Limerick, took a case against Topaz Energy Group Ltd, claiming psychological injuries arising out trauma she suffered after witnessing a man she had been in conversation with being murdered in February 2010.

John Coughlan, (33), of Pineview Gardens, Moyross, was sentenced to life imprisonment for the murder of father-of-two Daniel Treacy, (35), at the Topaz garage, Caherdavin.

Harrowing video footage of Mr Treacy, an innocent bread delivery man, being shot four times inside the filling station a Topaz filing station, was shown during the proceedings.

Ms Quinn gave harrowing evidence of witnessing Coughlan take a firearm out of a shopping bag before he assassinated Mr Treacy, shooting him in the head and body.

Ms Quinn, who was working at the shop’s deli-counter, said she heard a shot being fired and dropped to the floor. She crawled into a store room and used using her mobile phone to dial emergency services.

She claimed Topaz had not provided her with a panic button personal alarm which other staff were using.

She claimed she suffered additional trauma because the 999 dispatcher on the day kept ringing her back for more details and she was worried her phone would alert the shooter.

She said she had been casually chatting with Mr Treacy a regular at the shop seconds before the fatal gun attack.

Gardai said they believed the murder was in revenge for another killing in Limerick but that Mr Treacy was not involved.

Ms Quinn said she lay “terrified” on the floor as she waited for Coughlan to leave: “I was thinking this is it, I’m going to die, he’s going to come in here and kill me.”

Senior Counsel Michael Collins, for the plaintiff, argued that Ms Quinn’s “terror was prolonged” because she had to phone emergency services.

Dr Doyle supported this and said Ms Quinn would have suffered “additional trauma” as she may have felt “uncertain” gardai were coming to help as she kept on receiving calls from 999 requesting more information about the shooting.

Ms Quinn said she had assumed the panic alarm would have immediately alerted gardai however the court heard this was not the case, as the panic alarms were monitored by a private company who contact gardai in the event of an emergency at the premises in question.

Gardai arrived very quickly, it was heard, after receiving a phone call from a member of the public who heard shots being fired inside the shop.

Topaz provided psychological counselling for Ms Quinn and the other staff members who were in the premises on the morning of the shooting.

Topaz also carried out regular checks with Ms Quinn; had placed her on a months paid leave; had paid for another staff member to fly back to their native home abroad after the murder.

Topaz defended the case and argued the murder was “totally unforeseeable” and that Ms Quinn would not have been spared the trauma of witnessing what she did on the day every if she had a panic alarm on her person.

Presiding judge, Ms Justice Emily Egan found that Topaz acted negligently and in breach of its statutory duty of care by failing to implement its health and safety procedures by failing to provide Ms Quinn with a mobile panic alarm.

She found Ms Quinn’s PTSD was “aggravated” due to this, however she noted that Topaz had been supportive of Ms Quinn who returned to work around six months after the incident at a different Limerick filling station.