THE UL Hospitals Group has been accused of not taking complaints about anti-abortion protests outside the gates of Limerick Maternity Hospital seriously.

‘Together for Safety’, a Limerick-based national campaign group calling for Safe Access Zones around hospitals where no abortion-related protests can take place, says their calls and complaints are being ignored.

Last week a spokesperson for the UL Hospitals Group told the Limerick Post that they had “not received any official complaints” about protests outside the Maternity Hospital.

However, in a six-month period this year, ‘Together for Safety’ says it documented dozens of protests outside the hospital, complaints about which were made to both the hospital and the gardaí.

“Over the last year, we have had numerous complaints made to us about anti-choice protests and activities taking place regularly outside Limerick Maternity Hospital,” said Yvie Murphy, co-convener of Together for Safety.

“These complaints have come from local residents, women and pregnant people attending the hospital, local businesses and the general public.”

“We have also been in contact directly with the Maternity Hospital, yet they appear to be minimising the issue or not recording all the complaints they receive.

“We are publicly asking why this is the case and why the hospital is not ensuring that those using its services can do so without being intimidated.

“Together for Safety, working with the Irish Council for Civil Liberties, Amnesty International Ireland, Doctors for Choice, Trade Unions, multiple other stakeholders, and cross party political representatives has a Bill going through the Seanad at the moment that would put an immediate stop to these activities and the distress that they cause to pregnant people, staff and the general public,” Ms Murphy explained.

“We are calling on people to contact their local representatives to ask them to support the Bill through the upcoming stages. For those staff who do not feel safe enough to express their concerns to their employers, we strongly encourage you to contact your trade union where you will be fully supported to make your complaint.

“Finally, we ask as a matter of urgency that the Limerick Maternity Hospital begin to log all of the complaints that are sent in to them,” she concluded.

Karen Sugrue, co-convenor of Together for Safety, said the orgnisation has been approached by staff of the hospital who are upset and frustrated by these protests but have asked for anonymity as they were concerned that a complaint would impact their jobs.

“In 2021 it is beyond belief to think that we still have Catholic ethos hospitals where staff are afraid to voice complaints about anti-abortion protests and that the hospital isn’t keeping record of complaints made by service users and local residents,” continued Ms Sugrue.

“While some people working in the hospital might not view the occasional person outside the hospital saying prayers with rosary beads as intimidating, we would argue that even one person being negatively impacted by this sort of anti-abortion activity is one too many.

“The hospital has a duty of care towards its staff and service users. Everybody should be able to access healthcare in safety, privacy and with dignity.

“Anyone affected can contact us at www.togetherforsafety.com or on social media at together_safety,” Ms Sugrue concluded. 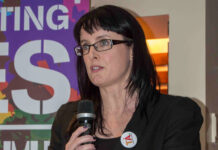