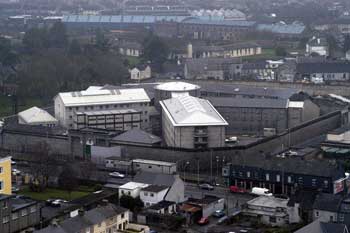 SIM cards used in miniature mobile phones are being smuggled into Limerick Prison under prisoner’s foreskins, according to a prison source.

The unregistered SIM cards are untraceable making it difficult to prosecute those smuggling the illegal contraband into jails.

It is well known that the corresponding miniature mobile phones are often smuggled in by prisoners “internally”.

“That’s how it’s done, these tiny SIM cards for miniature phones can be hidden in the foreskin, among other ways,” said the source.

This method of smuggling can allow a prisoner or visitor to bypass security.

“There’s not much metal in these things, they’re really tiny, so they’re not picked up by metal detector. That means there’s no notification that there’s been a security breach.”

“This is just another way of smuggling phones and SIM cards into jails, it’s been going on for quite a while now.”

Other illegal contraband is smuggled into prisons in many different ways such as dipping stamps in LSD, or sticking postcards together to conceal powdered cocaine.

The prevalence of drones has also caused problems for prison management with attempts by drug gangs to courier drugs into prison yards from the air.

Last January, gardaí foiled an attempt by a criminal gang to deliver a €5,000 drugs package, mobile phones and chargers into Portlaoise Prison using a drone.

He added that a “suspension of visits for significant periods since March 2020, as a result of Covid restrictions, has forced a shift in the methods used for trafficking contraband into prisons.

“We have seen an increase in the number of ‘throw overs’, where contacts on the outside attempt to throw mobile phones and drugs into exercise yards.

“Due to the regimes currently in operation in our prisons, prison staff have been able to identify and intercept many of these ‘throw-overs’ ensuring they do not reach the prison population. Staff have also increased the use of random and intelligence led cell searches on a daily basis,” he said.

The prison service dog unit. which is responsible for carrying out searches around prisons, includes “a greater focus on searching deliveries”.

The spokesperson cited “a recent example of this, in Mountjoy Prison, where two of the biggest seizures of contraband to date was recorded”.

He said the prison service has noted “an increase in drugs found in post, parcels, and prisoner clothing as a result of visits being suspended” but that it has had success in tackling this through advancements in drug detection technology.

“This has proved particularly effective in identifying drugs that are sprayed onto letters, newspapers, and other prisoner property.

The spokesperson added: “The Irish Prison Service works in close cooperation with An Garda Síochána with regard to the sharing of information and the carrying out of joint operations aimed at targeting the smuggling of contraband into prisons”.

Over the past six years there have been 6,798 drug seizures in prisons, and, during the same period searches for contraband in Irish jails have yielded 5,884 mobile phones and 2,769 weapons.