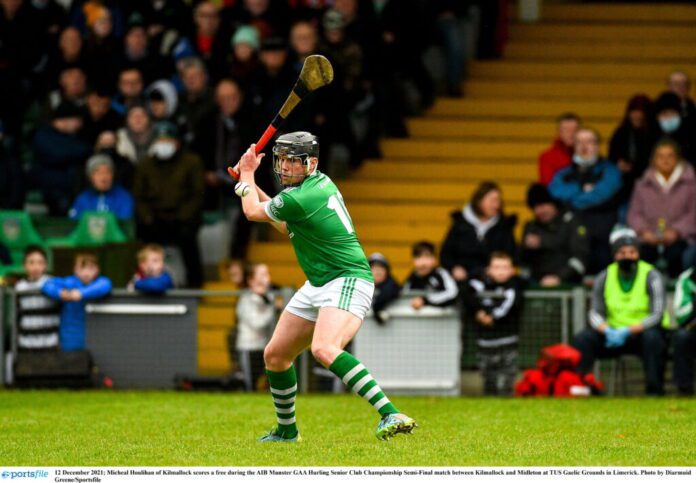 THIS Sunday, Kilmallock will continue their 2021 season into the new year as they attempt to add provincial honours to the county title they won in October.

The Balbec face seasoned Munster outfit Ballygunner in the final this Sunday in Pairc Ui Chaoimh with a 3.30pm throw in.

Kilmallock will be looking for a fourth ever title and a first since 2014, when they last ventured into the Munster championship.

Their opponents will be seeking a second title in four years as they beat the then defending champions Na Piarsaigh in the 2018 final after losing to the Caherdavin outfit in 2015 and ’17.

Sunday will be Ballygunner’s fifth Munster final since 2015 and 12th overall, which is comfortably the record.

However, the Waterford kingpins have been successful on Munster final day just twice while Kilmallock have a 100% record in the final.

Path to the Final

It has been a memorable season for Kilmallock who were slow off the mark in the Limerick SHC before finding their feet in the knockout stages.

It is well documented that they barely scraped past Ballybrown in the group stages after falling to Na Piarsaigh in their season opener.

Even against South Liberties in the quarter-finals, the South side had to work for their win, leaving the Gaelic Grounds with a 1-33 to 5-19 victory after extra time.

However, against Doon in the semi-final they finally hit their stride and have not looked back since, beating Patrickswell in the final before disposing of Midleton in the Munster semi-final with ease.

The aggregate margin of those victories is +25 with the Balbec conceding just three goals in that time after shipping eleven in their first three games.

That defence will have to be at their best when faced with eight in a row Deise champions Ballygunner who pose a huge scoring threat.

After overcoming Roanmore, 2-27 to 0-13 in the county final, Ballygunner made light of a lengthy break with a seventeen point win over Ballyea in the Munster quarter-final.

A contentious 2-11 to 0-12 victory against Loughmore Castleiney followed with the Tipp men losing both Noel and John McGrath to red cards.

Nonetheless, Ballygunner can call on a number of high profile Waterford men to lead their charge.

In goals Stephen O’Keeffe has remained at his All-Star calibre best since leaving the intercounty scene with former Waterford players Barry Coughlan and Philip Mahony anchoring the defence.

Dessie Hutchinson, Pauric Mahony and Peter Hogan lead the line in the forwards having accounted for 0-9 of their total against Loughmore.

But Kilmallock have a brilliant blend of experience in youth with a number of the successful 2014 side remaining at the fore.

In addition to that, All-Ireland winner, Paddy O’Loughlin has returned to the fold after taking a year away from the game.

Yet, it has been their young core that has impressed the most with Oisin O’Reilly and Micheal Houlihan both outstanding throughout the campaign.

Houlihan was top scorer in the championship while O’Reilly was MOTM in the quarter and semi-finals as well as bagging a goal in the final.

It is likely that each of those trio will be assigned to one of Hutchinson, Mahony and Hogan.

Interesting match ups like those are sprinkled all over the field on Sunday as Ballygunner look to match Kilmallock in terms of Munster titles and join Sixmilebridge, Glen Rovers, Toomevara and Nnewtonshandrum on a trio of triumphs.

However, the Limerick side will be keen to match Na Piarsaigh’s total of four as they sit second in the roll of honour, alongside St Finbarrs, one behind Blackrock.

History beckons for one of these sides.