Home Sport Gaa WATCH | “The effort these lads put in is phenomenal” | Billy... 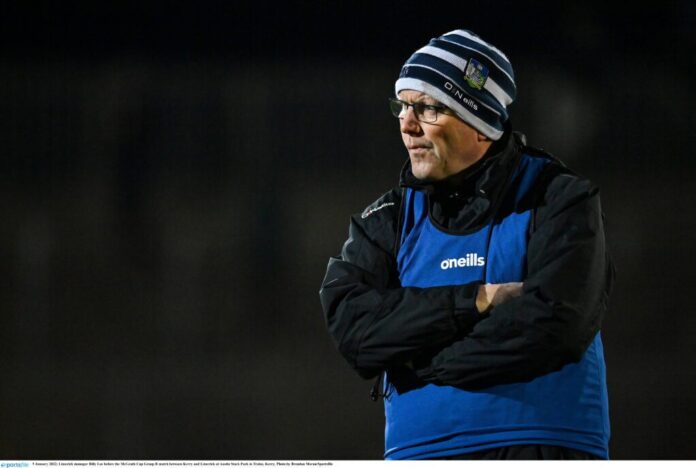 AN experimental Limerick side were put to the sword by Kerry in the opening round of the 2022 McGrath Cup.

In the end the margin was healthy as Kerry kicked off their 2022 with a handsome win over an experimental Limerick side in the McGrath Cup last night.

Kerry were 2-23 to 0-6 victors over a Limerick side that contained just six of the players that featured in last years Munster semi-final loss to Cork. Meanwhile, the Kerry side was laden with players who played in the All-Ireand semi-final last July.

Nonetheless, speaking after the game, Billy Lee was happy with his sides outing that saw a number of players make their debut in the green jersey.

“Look I’m happy with it. We had eight or nine lads who wore the senior jersey in a competitive game for the first time. Kerry had eight starters from the All-Ireland semi-final with Tyrone and three more that came off the bench today that started so they were very strong. The condition of those guys compared to where we are is pretty obvious.

“But it wasn’t about them. It was about us and what we wanted out of it. I’m happy with what we got out of it. The lads constantly tried the right things and to play the right way. There’s no question who the better side were or the deficit but I’m not worried about Kerry, I’m only worried about Limerick and what we’re aiming for.”

Next up for Limerick is Tipperary on Sunday in Mick Neville Park with Lee hoping to shuffle his squad who have been struck with a number of covid cases and injuries.

That game is likely to be Limerick’s last before the start of the League in late January but Lee is aware of the risk at playing players who haven’t had the sufficient training.

“I hope to shuffle the pack the best I can. I need to take advice from Adrian in terms of lads who played tonight, those coming back from Covid and lads who haven’t trained. You don’t just drop a fella in at the deep end because you risk injury and that’s just the way it is.”

The post WATCH | “The effort these lads put in is phenomenal” | Billy Lee reflects on Limerick’s loss in season opener appeared first on Sporting Limerick.