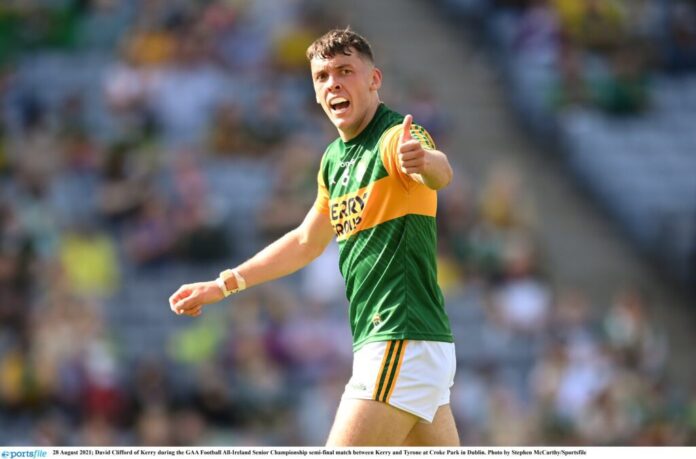 THE Limerick college are the first team into the knockout stages of the Sigerson Cup.

A David Clifford double proved the difference as UL advanced into the Sigerson Cup quarter finals at LyIT’s expense.

The Donegal outfit kicked 1-4 without reply in the first quarter to hold a slender lead at the break.

But Clifford and co dominated the middle quarters with the All-Star taking his tally in this years competition to 3-12.

That helped the Limerick side record a 2-23 to 3-15 victory and seal their place in the knockout stages.

The opening score in the Connacht Air Dome went the way of UL but from here it was all LyIT as mistakes at the back allowed them into the game which they led 1-4 to 0-5 at the water.

A couple of frees from Clifford helped Ul retake the lead close to the break with Mayo’s Eoghan McLoughlin beginning to take control with his surging runs. He would finish the game with 0-2, but his impact was far more than just on the scoreboard.

The Limerick college outscored their opponents 2-7 to 0-4 in the third quarter to increase a one point lead out to eleven.

Clifford’s first saw him pounce on a dropped shot, tipping past the onrushing keeper and firing into the net.

His second saw him calmly finish to the bottom corner before he was withdrawn after notching 2-7.

LyIT did find the back of the net twice in the final quarter, Joe Walsh completing his hat trick.

UL now earn a weeks break while LyIT enter into the third round where they can book their quarter final spot with a win.