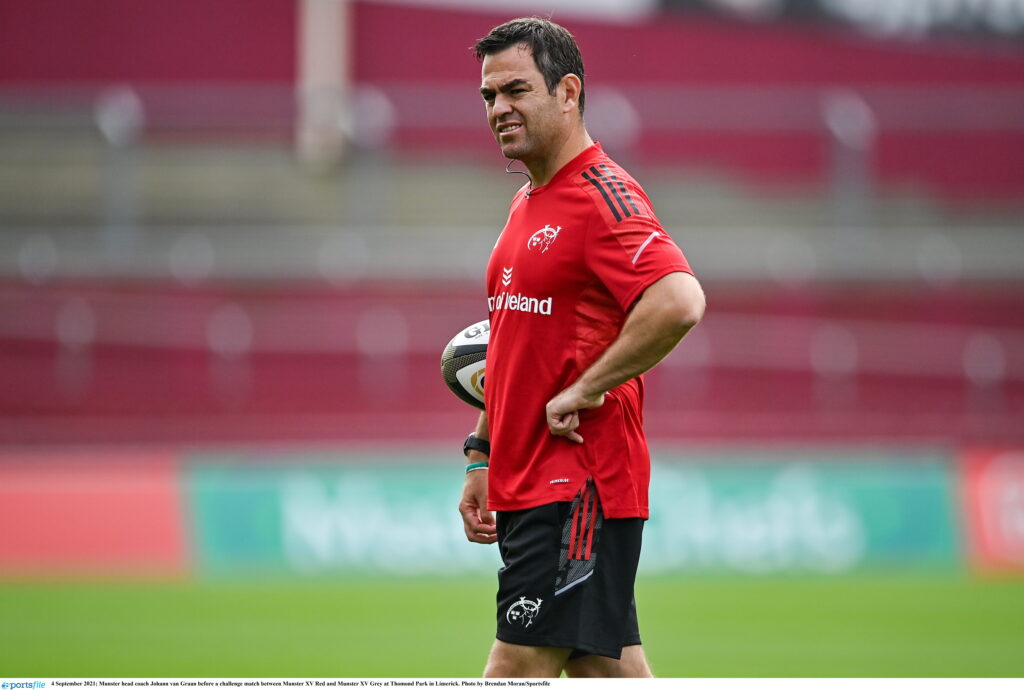 AFTER Munster’s win to Castres we look ahead to Wasps in the Champions Cup, Van Graan’s departure and some budding international stars.

Munster’s clashes with Castres are usually tough affairs and the most recent one was no exception. The red province eventually got the job done with only seconds left as they came from behind again to steal the game.

Munster walked away with the win that guaranteed qualification for the Champions Cup quarter-finals.

Tthe group stage isn’t finished as they host Wasps this weekend in the final round.

Attention after will shift to the Six Nations and the job on hand in the URC.

In the wake of the Castres win and with Wasps looming, below are some of the key talking points to emerge from the game.

Munster Looking ahead to Wasps

As mentioned, Munster have already booked their place into the quarterfinals of the Champions Cup. However, their next opposition are not as secure with Wasps currently finding themselves in eighth position with six points.

Wasps are not having the best of seasons as the club continues to fail financially, with their poor run of form is most likely a by-product of said financial turmoil. But the English side still have hopes to qualify to the next round after a surprise upset against the defending champions Toulouse. After there huge win the Munster faithful should expect a Wasps team that is ready to seize their opportunity against and already qualified team.

Munster are in fine form going into the game with two wins from their last two games, the province also has gone a perfect three from three in Europe. Munster will still be missing some star performers due to injury. The list of injured players includes Niall Scannell after a knock he picked up in France, Damien De Allende still remains out with an abdominal injury and Joey Carbery will be absent due to an elbow injury.

Yet Munster will be aware of the task ahead with Johann Van Graan focused on the game saying, “we’ve put ourselves in a really good space so it’s a massive game for us against Wasps next Sunday.”

In December of last year, it was announced Munster head coach Johann Vaan Graan would be departing the club on the completion of his contract. Vaan Graan who joined Munster in November of 2017 had only good words for the club following his announcement, as he said

“After arriving during the 2017/18 season, I am now into my fifth season with this group and in putting Munster first I believe it’s the right decision for me to call time on my contribution and step away at the end of the season.”

With Van Graan leaving it gives the Munster coaching staff something to think about, with JP Ferreira and Stephen Larkham opting to follow in their Head Coach’s footsteps. It was confirmed during the week that defence coach Ferreira, will be joining his head coach on his departure to Bath.

This leaves the province with plenty to think about as they reach the latter half of the season now. A new head, defensive and backs coach are needed. To fill that Head Coaches role, some names immediately spring to mind such as Graham Rowntree, the current Munster forward’s coach.

Time is still on their side but it is quickly running out as the business end of the season fast approaches.

With the Six Nations Championship starting on the 6th of February the provincial sides will have to deal with losing some of their star players to the competition.

Farrell yesterday named his squad with nine Munster men included. They are;

How Munster fare without those players will be interesting with the Wasps match likely to be their last outing for the men in red before they depart for international duty.

Gavin Coombes has been a standout performer in both the URC and the Heineken Champions Cup this season for the club with his most recent performance garnering much praise after secured the much needed try for the win.

Tadgh Beirne, Peter O’Mahony, Conor Murray, Dave Kilcoyne Keith Earls and Andrew Conway are staples of the international side as they have produced time and time again in the green jersey. Last year, Beirne was nominated for player of the tournament and has been a key cog for Andy Farrell whether in the second or back row fo the team.

Craig Casey is another welcome addition to the squad as his energetic style of play can really help Ireland push the pace in the later half of games. A fine replacement for the aging Conor Murray, Casey has the tools to become a standout performer for the nation.