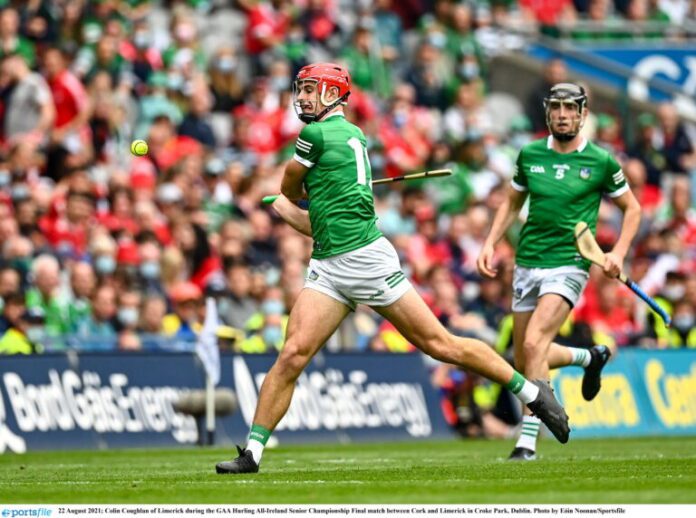 CLASSY Limerick proved far too strong for Clare as they eased to the Munster Hurling Cup title with a 0-27 to 0-18 win in Cusack Park.

In truth, Limerick never looked in trouble once they had their first lead of the day inside the opening ten minutes.

David Reidy got Clare off the mark from a free with his Limerick namesake replying swiftly from a similar position.

Two more frees from Clare’s Reidy had them 0-3 to 0-1 ahead before the Limerick onslaught arrived.

Dromin Athlacca’s Reidy reduced the deficit to one before a brace of monster scores from Colin Coughlan had limerick ahead for the first time.

Those efforts were followed by scores from Reidy, Pat Ryan and Darren O’Connell to push Limerick 0-7 to 0-3 in front.

Reidy replied for Clare, as did Diarmuid Ryan. But Limerick’s Reidy had the last score of the quarter with Limerick leading 0-8 to 0-5.

Cathal Malone and Reidy hit back for the Banner on the restart but Limerick found scores from Reidy (2), Oisin O’Reilly (2) and Gearoid Hegarty.

Diarmuid Ryan’s second stemmed the tide with Mark Rodgers also cutting into the lead as it stood 0-13 to 0-9 after 30.

Limerick’s Reidy extended the lead with a free before Richie English got in on the act, winning a Clare puck out and launching over from half way. Reidy finished off the first half scoring for Limerick as they led 0-17 to 0-9.

The sides exchanged the first six scores of the second half, the Reidys with five and Cathal Malone getting the other.

But three on the trot to finish the quarter from Reidy, Adam English and Brian O’Grady had Limerick 0-23 to 0-12 to the good at the final waterbreak.

O’Connel had Limerick’s first score of the final quarter.

Three in a row follows for Clare but O’Grady hit back for Limerick with a double.

From here the game petered out, Richie English producing a stunning block late on, as Limerick collected another piece of silverware.