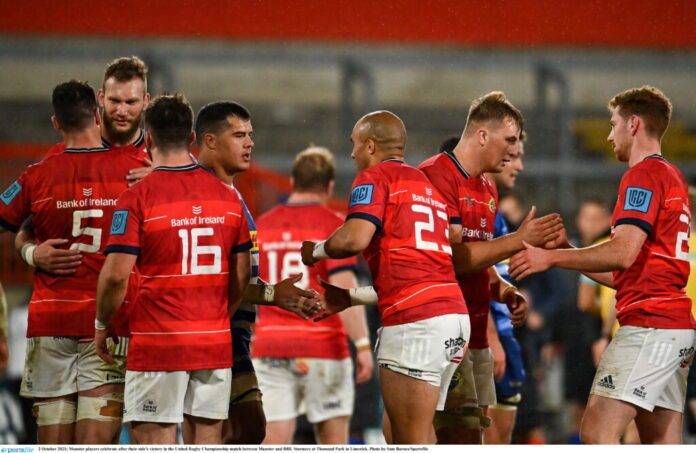 MUNSTER put on a dominant display as the red province recorded a bonus point win against Wasps.

Munster Rugby have successfully made it four wins from four in the Champions Cup this season. The red province put up a score line of 45-7 in their favour.

While Munster knew they had clinched a place in the next stage of the tournament, it was important for the province to finish the group as well as they could. Now after Munster’s dominant win, they will face either Sale Sharks, Montpellier or the Exeter Chiefs in the next round.

Before the game Munster were forced into making a few changes due to injury. Dave Kilcoyne had to be replaced due to the prop feeling unwell. Jeremy Loughman came in as his replacement.

Keith Earls was also disappointed as he picked up a strain before the game. Simon Zebo stepped up into the position and Alex Kendellen was brought up to the substitutes.

From the start Munster were fast paced and energetic, their play going forward caused Wasps problems from the beginning.

With a strong series of carries from both Stephen Archer and Gavin Coombes the red jerseys found themselves threatening in the Wasps 22.

Tadgh Beirne received the ball from Conor Murray, as Beirne was tackled by a Wasp’s player who had knocked the ball on in the tackle. Murray, alert as ever pounced on the ball and put it down over the line. After deliberation between the referee and the TMO the try was awarded. Ben Healy converted the try for the extras.

Loughman won a big turnover penalty after a loose Wasps play in their own 22 and Healy knocked over the penalty to make it 10-0 with 15 minutes played.

The second try was a beauty as Healy received the ball off a lineout and chipped over for Zebo to score his 24th Munster try in the Champions Cup. This moved Zebo ahead of the great Anthony Foley. Healy’s conversion made it 17-0 after 17 minutes.

Wasps didn’t want to just fade out of the game. The English Premiership side hit back with a Robson try on 26 minutes. The scrumhalf sniped over with Charlie Atkinson converting to make it 17-7.

Munster hit back soon enough as minutes later Jack O’Donoghue finished well from close range after a monster carry from Gavin Coombes off the back of a scrum.

Wasps had a strong end to the half as Gavin Coombes was shown a yellow card just before the clock turned red. Munster defended the onslaught well and earned a penalty on the end of the half.

Quickly after the second half began Munster were in for the bonus-point try that clinched third place in Pool B through Loughman on 44 minutes.

Around the 60th minute mark the game turned scrappy, both sides had multiple changes. One moment of quality during this period was when Mike Haley nearly got Zebo away on the left wing. Dan Robson was also shown a yellow card for a hit on Murray from the side of the ruck.

In the dying moments of the game Munster scored two great tries to finish off the performance.

Munster had a lineout on the right side of the field, the ball was swung out wide. Haley had the ball and he released Zebo on the wing for him to finish the try like he has done time and time again. Jack Crowley scored the conversion for the extras.

The final try came from a lineout from the left in the middle of the pitch. The ball was released from the lineout, and it came to Zebo. After a bombastic run he flipped the ball to Conway who managed to stay in play. The ball came to Scannell who dotted the line, Crowley then converted the try. Making the final score 45-7.

The post Post-Match Report| Munster Rugby run out against Wasps as Dominant winners in Europe. appeared first on Sporting Limerick.