THE University of Limerick (UL) has countered calls for more stringent fines for students  engaging in anti-social behaviour off-campus, arguing it already has sanctions in place to tackle misbehaviour by its students.

A UL spokesperson said it had recruited a Student Community Engagement Liaison Officer to engage with residents in the Castletroy area, where a considerable number of UL students rent off-campus accommodation.

A local residents group, which has complained over a number of years about students damaging property, cars and causing a nuisance, has sought “an independent impact study of the effect of the overflow of student population into the neighbouring community”.

It has also sought monthly meetings with the University and community involvement in the education of all students at the beginning of each year about living respectfully within the community.

Last year residents voiced concern after a large street party was held in an estate when strict social distancing and lockdown restrictions were in place.

The residents of College Court, Elm Park, Hazelwood, Milford Grange and Oaklawns say they have been engaged in a dialogue with UL for many years.

However, in a statement to the Limerick Post, they claimed there has been a more concerted effort over the last year to encourage the University to take responsibility for the collateral issues arising from the ever increasing numbers of students the University is attracting to the area”.

“Along with the ongoing expansion of the UL student intake with little or no regard to the lack of adequately managed student accommodation to house them during the academic year, the residents would like to remind the senior management of UL that our concerns have not gone away.”

The residents group has called for a “UL code of conduct in line with UCC, which clearly and transparently includes the wider community outside of the University; appropriate sanctions for negative behaviour and a clear transparent pathway shared with residents, as to how it is being dealt with”.

“Sanctions in UCC include fines ranging from €75 to €5,000, sanctions, suspensions and expulsions for breaches of the University Code of Behaviour,” Ms Sheahan said.

The group has also sought “a time frame for the recruitment of an independent person to oversee off-campus code of conduct that will liaise with the residents, UL, the gardaí, and Limerick City and County Council”.

The residents group expressed its appreciation to Gardaí and Limerick City and County Council’s “operational and enforcement teams for their continued work in the area” to curb anti-social behaviour.

UL has used public funds to provide garda patrols in off-campus estates, but has so far refused to answer questions as to how much it has spent on the patrols.

A UL spokesperson said a newly appointed student community engagement officer would be starting in the role on February 28.

“Their first task will be to engage with residents on the community liaison framework that has been developed. This is a pilot post and the intention is for the appointed individual to work with all stakeholders to develop a more long term approach to managing issues in line with stakeholder needs and University regulations.

“UL’s Code of Conduct already covers off-campus behaviour and appropriate sanctions applied via a formal complaints process under the complaints, discipline and vetting unit,” he concluded. 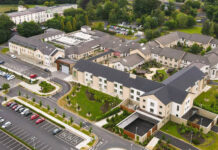