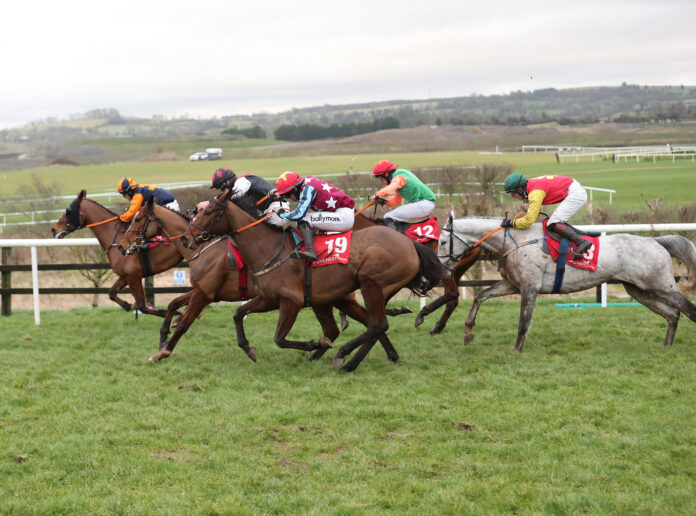 Billy Lee rode his first winners of the New Year with a double at Dundalk on Friday evening. He was off the mark in the opening two-mile handicap which he won on the Sheila Lavery-trained Annecherie. The Llewelyn Runeckles Partnership-owned 100/30 co-favourite came from off the pace to beat Jake Peter by half a length with the Summerhill trainer saying,

“There is a winners’ race next week but it might be a bit quick after running over two miles. She will get entered and I’ll take a look at it. If she doesn’t run she’ll get a break and I’ll look forward to the summer with her. I think she’s improving all the time and getting stronger. Billy said she loves the surface up here.”

Another very much at home on the all-weather track is the Henry de Bromhead-trained Catena Zapata which landed his second course success in the eight-furlong handicap to complete the Lee double. The 7/1 chance picked up well inside the final furlong to pip the Michael O’Callaghan-trained Chavajod by a neck with Lee saying,

“I won a maiden on him here and he was highly tried after that, he ran in a Derby trial and a few listed races. From what he was running in compared to now, he was running off a nice mark. Hopefully he can go in again.”

Chris Hayes rode the longest-priced winner of the evening as he easily landed the 12-furlong handicap on Luke Comer’s Bring Us Paradise. The 20/1 chance had loads in hand as he beat the Joe Murray-trained Never Back Down and Wesley Joyce by two and a quarter lengths. The intervention of the stewards was needed to decide the outcome of the eight-furlong conditions’ race with the verdict going in favour of the Mark Enright-ridden Jezebel Queen.

Gavin Cromwell’s 5/6 favourite Singsong Lady beat the Ger Lyons’ debutante Jezebel Queen by a nose but she was adjudged to have caused interference to the runner-up well inside the final furlong and the placings were reversed in favour of the 7/2 chance.

Richard O’Brien won the opportunity handicap hurdle at Naas on Saturday with 15/2 chance Sparkling Stars. Ridden by Shane O’Callaghan, the seven-year-old headed the front-running I Don’t Get It after the final flight and raced away to score by three lengths for the Grey Lad Cousins Syndicate. O’Brien said,

“That’s a lovely surprise. I only have him three weeks and to be fair he came in really beautiful shape from Eoin McCarthy, who I have to give massive credit to. I just cantered him and we thought it was a good idea to get him started. He’s a horse that we thought was quite unexposed on his profile, that’s his first run in a handicap, but I didn’t think it was going to happen that quick. I thought Shane was terrific on him, he sat and sat and on that ground it worked very well.”

Enda Bolger and JP McManus enjoyed a 1-2 in the cross-country chase at Punchestown on Sunday where Midnight Maestro edged out Shady Operator. The 9/2 chance, the first of three winners for Mark Walsh and McManus on the day, came from a little off the pace to deny the front-running 5/2 shot by a neck with both horses doing enough to be earn entries for the Cheltenham Festival.

Cratloe conditional rider Mark McDonagh partnered the Denis Hogan-trained Young Dev to his first success since the famous “no irons” win at Navan a year ago when lunging late to take the near three-mile handicap hurdle. The 12/1 chance from well off the pace to beat the Willie Austin-trained Boss Girl by three-parts of a length for owner Liam Mulryan.