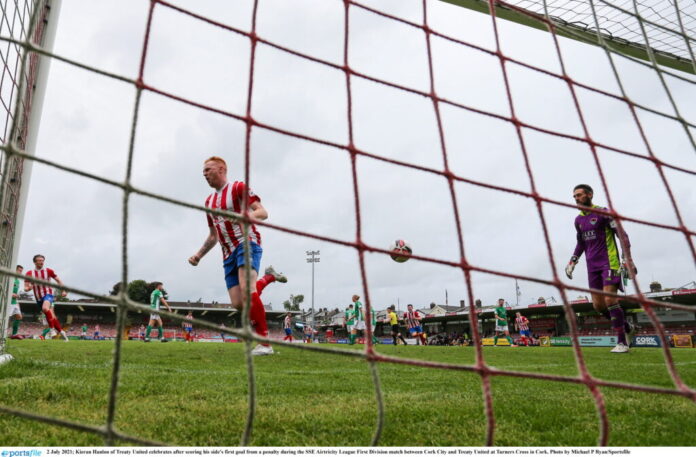 Kieran Hanlon: Hanlon has enjoyed somewhat of a rejuvenation following his return to senior football.

As he has admitted himself on several occasions that the junior football scene did not carry the same motivation for the former Pike Rovers man as lining out for his home county on a weekly basis.

The relationship between Tommy Barrett and ‘Red’ goes all the way back to 2013 when the striker made his first inroads to Airtricity League football with Limerick FC’s underage set-up.

He built up a fearsome reputation for his lethal finishing and made his senior debut for the club in 2015 and went on to make 6 further appearances including in the opening game at the Markets Field against Drogheda United. Kieran returned to junior football once more at the end of the season to join Carew Park.

Just as it looked like his time at senior level had come to a premature end, Hanlon re-signed for Limerick FC ahead of the 2019 first division campaign. He formed a decent partnership with Connor Ellis as Barrett’s team started the season with a play-off push. However, several off the field issues caused their season to tail off and Hanlon signed for Ballynanty Rovers.

Following a brief spell with Pike, Barrett signed Hanlon for a third time when Treaty United were formed. However, it was far from plane sailing as Hanlon revealed he had only been signed as Treaty were short of attacking options.

Originally, he was expected to sign in July to allow him to reach the fitness levels required, but he signed before the start of the season.

Hanlon led the line throughout the season and scored 6 goals for the club as Treaty reached the play-offs in their maiden season. However, injury ruled him out of the play-off campaign.

Kieran will face tough competition this year with experienced striker Enda Curran arriving from Mervue United. He has had a short pre-season due to injury but will be available for selection against Wexford in the season opener.

Enda Curran: The experienced striker arrives following a year’s hiatus from Airtricity League football. Curran spent last season at Mervue United but was convinced to return to senior football after a long pursuit which began at the start of 2021. He began his League of Ireland career with Mervue in 2010 before signing for Galway United the following year.

Due to financial uncertainly, his hometown club left several players go in the summer including the physical striker. He became one of the very few players to represent all three Galway clubs at senior level when he signed for Salthill Devon in 2012.

His performances for Salthill in 2013 caught the eye of Roddy Collins who brought him to Athlone in August to aid his promotion push. Athlone earned promotion but Curran followed Collins to Derry City for a brief spell which ended when the outspoken Dubliner was sacked in May.

Curran enjoyed his most prolific goal scoring period between 2014 and 2017 while playing for Galway United once more. He scored 12 goals in 25 games for the club in 2015 at premier division level.

Spells at Longford and Athlone followed before he returned to Galway for a third spell in 2020. He could not commit to full-time football and departed following a play-off defeat to Longford.

Enda will certainly hope to hit the ground running and looked impressive in his debut against Waterford in the Munster Senior Cup. He is tall in stature but also possesses a decent amount of pace to trouble centre-backs. He could be crucial in both boxes for Treaty this season.

Jack Arra: The former Regional man makes his first foray into senior football and arrives as an unknown quantity. Arra scored a whopping 21 goals in half a season for the Dooradoyle club.

It is certainly going to be a huge step up for the striker and he will have plenty of competition with Hanlon and Curran currently ahead in the pecking order but he is keen to make an impression.

Upon signing for the club, Arra described the step up to senior level as a dream and it was refreshing to hear such enthusiasm from the player. He is extremely hard working and will be an asset to Barrett if his side are trailing in games.