TAOISEACH Micheál Martin has said the government will do all it can to safeguard 450 jobs at the Russian owned Aughinish Alumina refinery in Askeaton.

Aughinish is the largest alumina refinery in Europe, and workers are worried that it may be included in sanctions against Russia following its invasion of Ukraine.

The Sunday Business Post reported that Mr Martin “rejected a call from the Ukrainian ambassador to Ireland to shut down the Limerick refinery founded by billionaire Russian oligarch Oleg Deripaska, an associate of the Russian President Vladimir Putin.

Meanwhile Bloomberg has reported the parent company of Aughinish-owned Rusal is now “considering carving out its international business into a new company opened by management and non-Russian investors”.

Shipments of alumina from a refinery owned by Rusal in Ukraine were halted last week after a ban was imposed on Russian ships at ports in the UK and Northern Ireland.

Aughinish faced US sanctions in 2018 but these were lifted after Mr Deripaska reduced his shareholding to below 35 per cent. The Russian billionaire, who is still fighting these sanctions through the courts, has moved to distance himself from President Putin through a series of social media messages opposing Russia’s invasion of Ukraine.

Speaking to reporters in Limerick, the Taoiseach said sanctions against Russia and its assets were being continually reviewed however, moving to reassure Aughinish workers, he said, “what’s very important is that the balance is right that the objective of sanctions is to punish Russia not Europe.

“We have to balance that and bear all of that in mind, which the European Commission and the US and others have been doing in designing the sanctions that have been imposed.”

“The sanctions already applied on Russia have been unprecedented, particularly in terms of denying the Russian central bank access to its own reserves. In addition to the financial sanctions, the industrial sanctions are also very hard hitting.”

“Aughinish Alumina is not included in sanctions and, because we’ve have taken a strategic approach to this, we are working all of the time in cooperation with our European colleagues in terms of how sanctions are designed and developed”.

“We have to do what is strategically clever and in terms of putting the focus an the pressure on the Russian leadership and on the Russian industrial base that enables them to wage war, so the sanctions are continually reviewed and will be so as we meet with our European colleagues.”

The Taoiseach said he and his cabinet colleagues were very conscious of the Limerick workers’ situation .

“They have not been included in the sanctions regime on the basis of their strategic importance to Europe and that should be an important reassurance to them,” Mr Martin said. 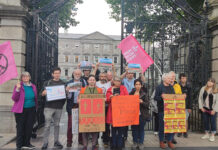 Groups will do everything possible to stop Aughinish rock-blasting 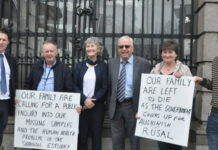