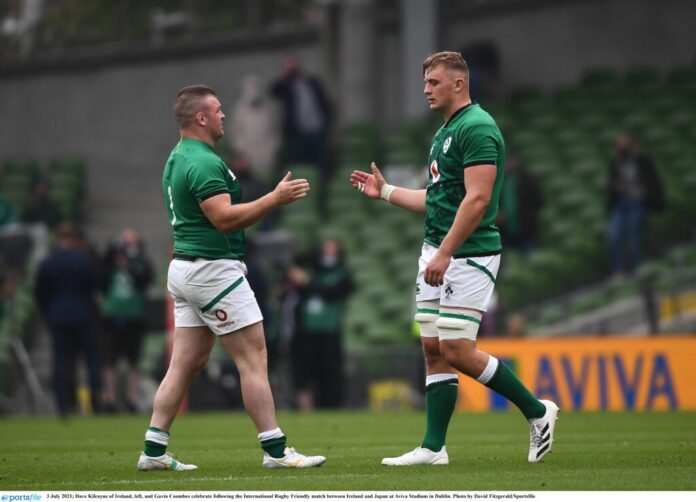 THROUGHOUT Ireland’s difficult 15-32 victory over England in Twickenham many players fronted up when called upon.

Two more Smith kicks drew the hosts level by the hour mark as Ireland struggled to add to Hugo Keenan’s converted effort from just before the break.

However, despite a worryingly high penalty count, the Irish bench had the desired impact as Conor Murray sent Conan over before Bealham barged through for a 75th-minute bonus point try.

Captain Jonathan Sexton converted both to finish with 12 points, as Ireland head into the final round as France’s only remaining challengers for the Championship silverware.

Now it’s time to look at how each of the Irish players faired on game day.

Not a great day for the Irish front row as England’s scrum was dominant. Healy found himself on the end of plenty of penalties from the scrum has his side kept going down. A late intervention at the Irish line to halt England was one of Healy’s shining moments.

Sheehan proved himself as force to reckoned with as his ball carrying and footwork was excellent. His line break at the beginning of the game started the play that James Lowe would eventually score from. Not the best day in the scrum but good lineout throwing helped soften the blow.

Like Healy, it was a tough day for Furlong at the scrum. Opposite Ellis Genge, Furlong was uncharacteristically pushed around. Although it wasn’t his best performance he still tried to get involved right up until he was taken off near the 70th minute mark.

Beirne had a great performance whether it was tackling, carrying, or jackaling. Although being used to his brilliant best made his performance look a little lacklustre which is a great credit to his skill. When the game got tough he got stuck in and showed a lot of character

Unfortunately for Ryan a dangerous tackle from Charlie Ewels (which he was red carded for) cut his game short as he failed his HIA.

A solid performance from O’Mahony but not as noteworthy as we are used too. He was well in at the breakdown and in the lineouts as one would expect.

As always Van Der Flier’s non stop work rate was extremely impressive he looked to affect the game in anyway he could. Unfortunately he didn’t have his usual dominance of the breakdown, but his tackling and hard work made up it.

He had a try disallowed and a wayward pass as Conor Murray was almost put in for a try. These mistakes didn’t tarnish a great performance however as he carried hard, tackled well and gave an excellent showing of himself on the field.

A man of the match award speaks for itself. Gibson-Park was at the fore front of all of Ireland’s best play. His game tempo was incredible moving the ball out of the ruck without delay and he pushed the pace of the game. His quick tap to set up Keenan’s try is an example of his brilliant quick thinking.

In a difficult game he managed the proceedings as well as he could. Throughout the middle of the game he did seem to disappear for parts but an excellent finish to the game proved how valuable he is to the team. His place kicking helped keep Ireland ahead for large portions of the match.

After a brilliant performance against Italy, Lowe earned his spot back and he delivered spectacularly. His ball carrying and footwork helped Irish play tick over in times of great stress. His strength is valuable on both sides of the ball. An excellent all-round performance.

Aki was up to his usual tricks in the green of Ireland. He made the strong carries and hard tackles that Rugby fans expect from him. His output in the second half waned but it was still a string performance from the Connacht man.

This wasn’t his best performance this season in the Irish jersey. He helped his team by cleaning up some serious sloppy play in the second half but was never able to affect the game how he usually does.

Conway put in a dogged performance as he popped up plenty of times to help his team relieve pressure and apply some pressure. Two beautiful 50-22 kicks gave Ireland respite and an attacking platform against the English onslaught. A great carry also set up Jack Conan’s try.

Another man of the match candidate Keenan was immense and a real asset to the Irish set up. Under the high ball with immense pressure from the English contingent he kept his cool and defended with great heart. He took his try chance with great composure also. If he wasn’t solidified as Ireland’s No.1 fullback he definitely is now.

A super-sub is the perfect phrase for Conan’s time on the pitch. He immediately started carrying the ball and putting in tackles. He started off the move that would lead to his eventual try that helped Ireland crush the English fightback.

Like Conan, Henshaw made an instant impact as soon as he had the ball in his hands. Henshaw gave Ireland a direct attacking threat with his dynamic ball carrying. His physicality on the defensive side also helped push on Ireland to get the bonus point in the final 10 minutes of the game.

Other replacements didn’t have the time/possessions to make a real impact.