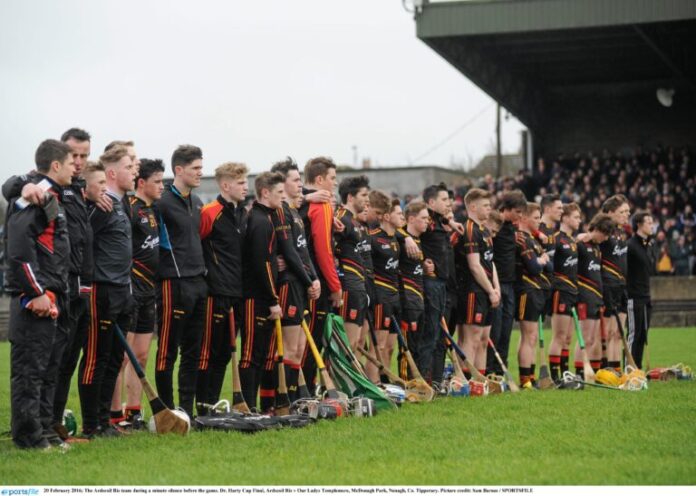 Niall Moran’s side were too strong for the Kilkenny kingpins at the fourth attempt to finally seal the All-Ireland title on a 1-17 to 0-15 scoreline.

A David Kennedy goal in the final quarter was the icing on the cake for a superb Ardscoil side with Shane O’Brien awarded the man of the match award.

St Kierans had the first score of the game but a quick fire David Kennedy double pulled Ardscoil into the lead for the first time as Shane O’Brien made it a two point game.

Four on the trot had the Kilkenny school up two with Niall O’Farrel reducing the deficit from a free.

O’Farrell could have given the Limerick school the lead but his penalty was well stopped midway through the first half.

St Kierans reestablished their two point lead at 0-6 to 0-4 on twenty minutes but the final ten belonged to Ardscoil.

A flurry of O’Farrell frees as well as a couple from play had the Limerick side well in front at the break as they hit seven on the spin.

St Kierans had the first two scores of the second but O’Brien stemmed the tide for Ardscoil.

But another two from the Kilkenny outfit had the deficit back to 0-12 to 0-10 with a quarter of an hour to play.

Again O’Farrell replied with one each from play and a free.

Two more followed for the side in black and white but Shane O’Brien replied with a fantastic fetch and score from a Seamie Gully puck out.

St Kierans had the next score before David Kennedy struck the crucial goal after Dylan Lynch set him free.

Gully then made a superb save at the other end for the Limerick school.

Joe Fitzpatrick had a long range effort for Kierans to reduce the gap to five but Kennedy replied.

Kierans had a consolation point with the final puck of the game but the day belonged to the side from Limerick.