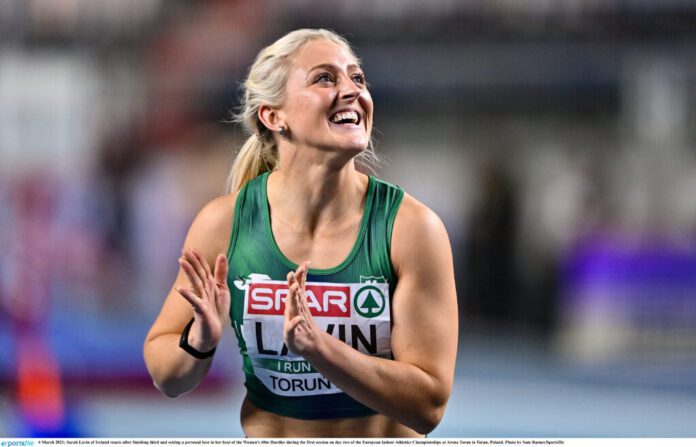 SARAH Lavin placed seventh in the final of the 60m hurdles at the World Indoor Championships after setting two PB’s on an incredible day.

It was a memorable weekend for Limerick’s Sarah Lavin as she finished seventh at the World Indoor Championships in Belgrade with a number of personal bests.

With a brilliant showing in the semi-final setting a time of 7.97m, her first sub 8-sec run that earned her a spot in the final of the 60m hurdle.

In the final Lavin couldn’t replicate the form of her pervious run where France’s Cyrena Samba-Mayela set an impressive time of 7.78 in first. Second placed Devynne Charlton from the Bahamas clocked a 7.81 and third placed Gabriele Cunningham of the USA put in a time of 7.87 while the Limerick star finished with a time of 8.07.

Nonetheless, it as an incredible effort from the Olympian who beamed with delight when speaking to RTÉ in the aftermath.

“To reach a World Indoor final, nobody will take that away from me. To break eight seconds on this day is a dream come true.

“I have to be immensely proud. I mean, seventh in the world. First global final as a senior athlete – I’m proud.”

Over the weekend, Lavin became the first Irish athlete to reach the final of a World Indoor Athletics Championship since 2010 and first woman to do so since Derval O’Rourke in 2006 with the Cork woman praising Lavin in the aftermath.

With huge positives to take from the event, Lavin will surely be looking forward to the World Championships in July and also the Europeans in August.