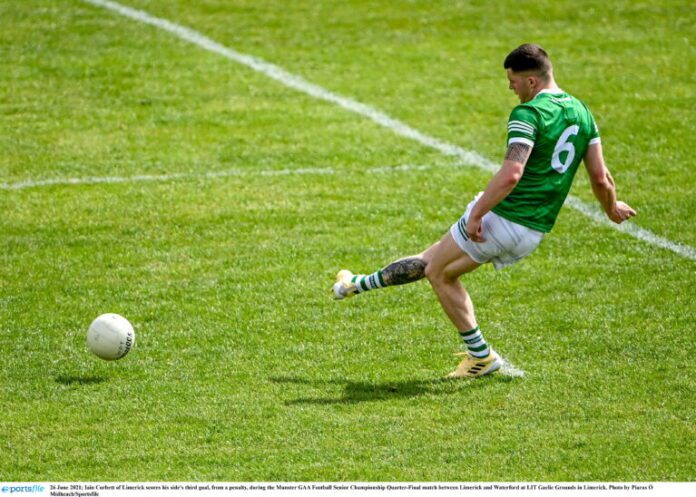 BILLY Lee’s side left it late to pick up a crucial victory in Portlaoise.

Three late Robbie Bourke scores proved the difference as Limerick escaped O’Moore park with a 0-15 to 0-14 win on Saturday evening to maintain their promotion hopes.

The win moved Billy Lee’s side to the top of the table momentarily before Louth retook pole on Sunday afternoon.

Nonetheless, with results elsewhere on Sunday going their way, Limerick now have promotion chances in their own hands with a win over Fermanagh this Sunday guaranteed to see them into Division 3.

In Portlaoise, Adrian Enright kicked the first score of the game, one of four in the opening half for the Fr Caseys man.

The sides went score for score throughout the first twenty five minutes as Peter Nash and Josh Ryan also added their name to the scoresheet.

Enright levelled proceedings for the fourth time on 25 with Cillian Fahy pulling Limerick ahead a minute later. Further scores from Ryan and Enright had Limerick three to the good on the stroke of the half hour.

Another from Enright furthered the lead with Mike Donovan popping up from corner back to make it 0-10 to 0-5. Laois did have the final score of the half but Limerick were relatively comfortable heading into the dressing rooms.

But by the time Limerick troubled the scoreboard in the second half with with just under ten to play, Laois had moved in front with five unanswered to start the second period.

It was Ryan that levelled while Darragh Treacy but the hosts hit back to retain the lead with five to play.

Substitute Robbie Bourke responded for the visitors and Darragh Treacy gave Limerick their fist lead in fifteen minutes as the clock approached the red.

Laois replied in kind with two on the bounce to move 0-14 to 0-13 in front with the time in the red.

But two more from Bourke turned the result as Limerick made it three from three on the road in the Division with a huge game to come against Fermanagh this Sunday where promotion can be clinched.