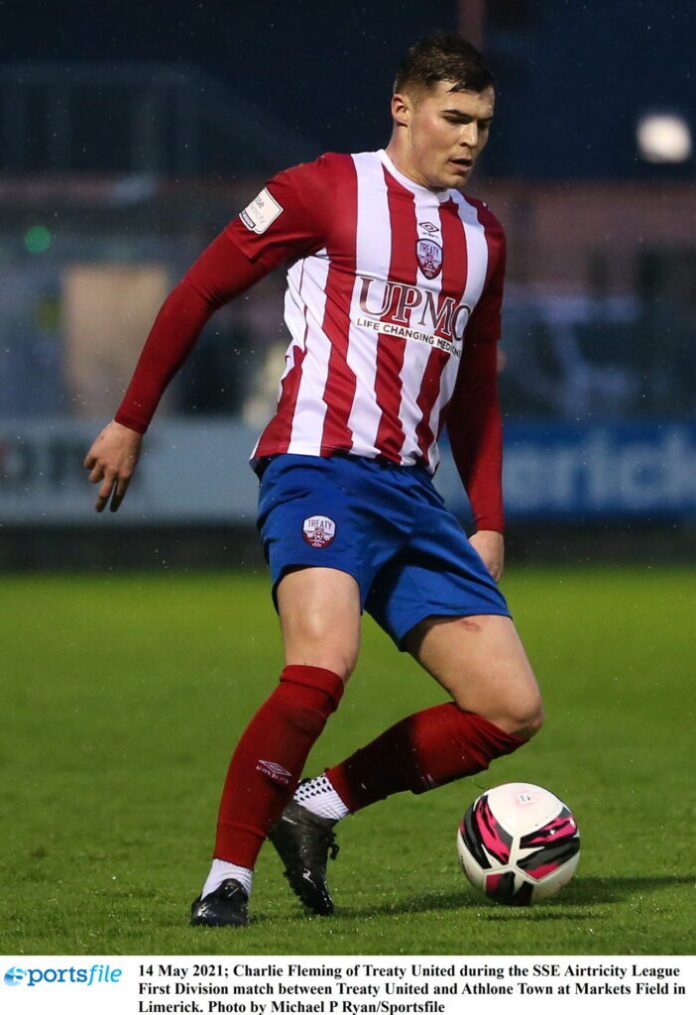 The senior men’s side were beaten 0-4 by Munster rivals Cork City at the Markets Field while Don O’Riordan’s women’s side were defeated by title challenging Peamount United led by Irish international Aine O’Gorman.

It was Treaty United men’s first game at home and with the earlier kick off time on a Bank Holiday weekend, a big crowd was expected at a sun drenched Garryowen venue. There was a huge sense of anticipation with Cork also bringing a big following support and were situated behind the goals at the Mulgrave Street end.

Cork City made a blistering start to the game with Nenagh native and current Celtic loanee Barry Coffey being afforded far too much space in midfield to drive forward and curl a shot beyond Jack Brady. Much like the preceding Monday night in Galway, Treaty conceded an early goal and gave themselves a real uphill task.

In truth, it was evident that losing Enda Curran to a late fitness test was a blow to Tommy Barrett as the former Galway striker had scored three goals and three games. Kieran Hanlon was Curran’s replacement but he got little change out of Ally Gilcrhrist and Jonas Haikkinen who were commanding all day with Hanlon isolated from the rest of his teammates.

One of the most disappointing aspects of the defeat for Barrett and his coaching staff was the concession some very sloppy goals. Treaty were very hesitant in defence and this was evident for Coffey’s goal and for Cian Bargary’s first goal where the ever-reliable Marc Ludden allowed both players to travel too far before attempting to close them down.

The third goal also came from Treaty losing possession in their own half and decent play between Murphy and Bargary resulted in the latter blocking down a Joe Gorman clearance and poking into the net from close range. Although the Cork press was effective, it appeared to be far too easy for Cork to play through Treaty and get between the midfield and the defence.

The performance was unlike Treaty when you see how difficult they have made it for teams to score against them since their inception into the league last year. Another change on Friday appeared to be the insistence of Joe Gorman to take the ball short from goalkeeper Jack Brady which caused problems for Treaty on several occasions, especially as centre-back partner Sean Guerins did not appear to be on the same wavelength as Gorman.

The day was summed up by the fourth goal when a free-kick delivery into the penalty area was sent into the air by a Cork header and as the ball looped towards goal, Brady appeared to lose his bearings and dropped the ball into the 6 yard area for Haikkinen to run onto and tap home from close range.

Barrett emptied the bench once more and gave a League of Ireland debut to Jack Arra in what was one very few positives on the day.

Barrett stated his hope that the performance was a one off from his team as they prepare for Waterford FC’s visit to the Markets Field this Friday night. It has been a tough schedule for Treaty as they will have faced the top three sides in the league and the strongest sides on paper.

Waterford will be favourites for the tie and Treaty supporters will be hoping for a response for their team following their heaviest defeat in their very short history.

Captain Jack Lynch is still a few weeks from full fitness but Conor Melody and Colin Conroy should be available for selection following concussion. Another week should also see Curran available for selection. Adrian Finnin will be previewing the game with analysts Jason and Noel O’Connor on the 8th episode of ‘The Soccer Scene’

To view highlights of the goals from Friday’s game, see below.

The post Treaty Looking to Bounce Back from Heavy Cork Defeat appeared first on Sporting Limerick.