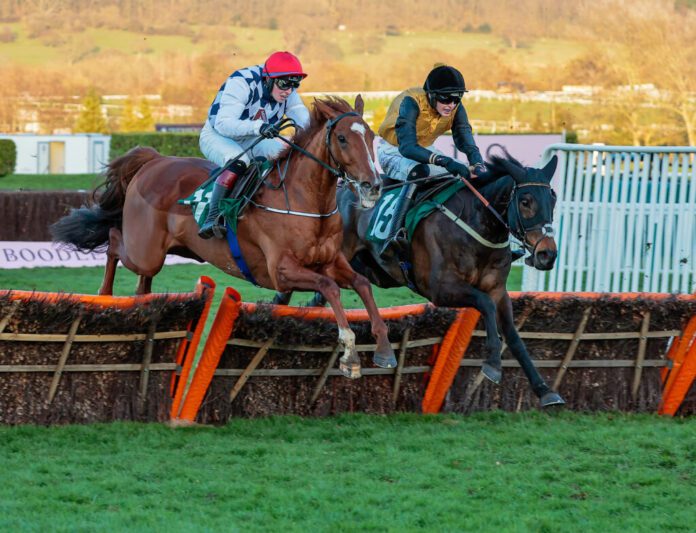 Cheltenham Festival winner Mark McDonagh was among the winners at two of the three racemeetings held in Ireland last week. Either side of his memorable success on the Joseph O’Brien-trained Banbridge in the Martin Pipe Conditional Jockeys´ Handicap Hurdle on Friday, he rode a winner at Down Royal on St Patrick’s Day and at Downpatrick on Sunday.

The Topham Chase at Aintree has been earmarked for the McDonagh-ridden Roi Mage which landed the conditions’ chase at Down Royal on Thursday. Trained by Pat Griffin, whose son and assistant James was on racecourse commentary duties at the Bank Holiday meeting, the 13/2 chance battled well from the final fence to beat the Willie Mullins-trained 11/10 favourite Agusta Gold and Gordon Elliott’s Samcro and James Griffin reported,

“I really enjoyed calling the race, especially for Dad, as it’s the first time calling him a winner. This lad was third in the Grand Steeple-Chase de Paris and was bought for the Aintree Grand National. That’s what the owners want but he’s not going to get in this year, although hopefully he will next year. He’ll go for the Topham Chase next on the Friday of the Aintree meeting.”

A Cheltenham Festival winner for Mark McDonagh as the Joseph O’Brien-trained Banbridge gets the better of Cobbler’s Dream to win the Martin Pipe Conditional Jockeys’ Handicap Hurdle on Friday. Photo: Patrick McCann/Racing Post

McDonagh and his fellow Cheltenham Festival winner Gavin Cromwell rounded off a huge week when taking the Randox Ulster Grand National with the JP McManus-owned Spades Are Trumps at Downpatrick on Sunday. McDonagh added to his memorable success in the festival’s final race when partnering the 6/1 chance to a six-length win over the Tom Gibney-trained Agent Boru. The Cratloe jockey said,

“I’ve had a great week and I want to thank everyone for giving me the opportunities, but for them I wouldn’t be here. Spade Are Trumps just took to the course, he travelled well and enjoyed himself out there.”