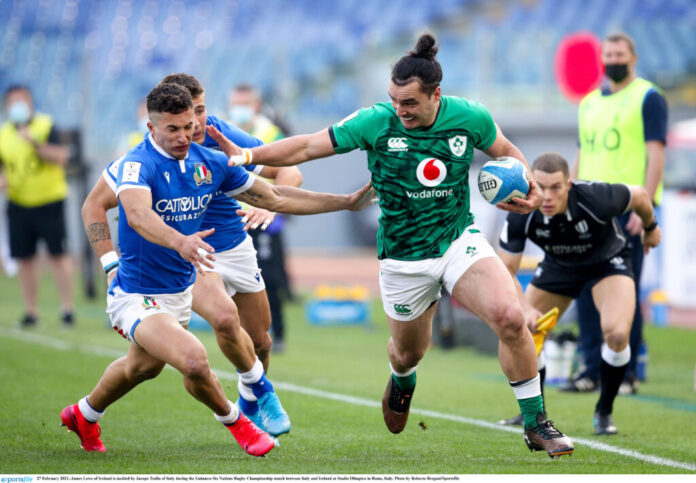 AFTER five rounds of brilliant Rugby, France have emerged as the Grand Slam champions of 2022 after being just a step ahead of the rest of the back.

Their two most difficult fixtures which came against Ireland and Wales proved the maturity of this French side as when they needed an answer to their opposition, each time they found a way to pull the game out of the bag.

That being said the French aren’t the only side with stand out performers as each team had their share of stars.

Team of the Tournament

In his second Six Nations in the French side, Baille throughout the tournament has proved he’s the only option for the No.1 jersey. Important moments for his tournament include his try against Ireland which gave France valuable time to quell the Irish comeback. Against Scotland he made eleven tackles and dominated his opposite number.

With a total of 35 tackles throughout the tournament he was like a wall around the breakdown. further cementing his spot in this team Baille carried the ball for 25 meters a game on average.

Marchand has filled the Hooker position beautifully for France. His set piece play whether it be from the lineout or the scrum was immense. In a high pressure position like Hooker he kept a cool head in each of the games, as a lineout rate of over 75% complete is not to be scoffed at.

Featuring in all five of the games for France he was stalwart at his position. A total of 20 tackles coupled with 132 meters gained only add to the reasons why he should be featured on this list

Although as a team England had a disappointing tournament, Ellis Genge was a standout performer and will definitely have a place in the English pack for a long time. Over the five games Genge recorded a staggering 40 tackles, averaging eight a game.

To add to his impressive tackle count Genge recorded 271 meters carried with the ball in hand, at an average of 54 meters a game. The attacking threat Genge carries with him is incredible and he fully deserves his spot as a player of the tournament.

The South African born second row has been one of France’s top players. His work at the set piece was top notch. In the scrum the French were dominant and a good pair of second rows are a key to success in that area.

When called upon in the lineout he was a great option whether the ball went to his hand or his teammates. He made 41 tackles throughout the tournament with six dominant tackles, one of the highest counts in the tournament.

A try against Scotland further cements his position on this team.

Another player who’s side under performed, Will Rowlands was a shining light in a misfiring Welsh team. Filling in for the perennial Alun Wyn Jones was not going to be easy, but in each game Rowlands played , he grew into his role more and more. With 47 tackles made over the five games he was first up to make hits for his side.

Since Beirne First made waves playing for Scarlets where he won player of the year he has been an incredible player. When in the Irish green he gives everything to make an impact, His breakdown work is second to none with excellent counter rucking and jackalling.

His tackling is reliable as they come as he made 37 tackles throughout the tournament. His versatility is also a major asset as the ability to play both second row and back row allow for a myriad of parings in the squad. Beirne also carried the ball for 202 meters averaging 40 a game and his ball handling skills are backline worthy.

Beirne helped Ireland tick and it cements his spot in this list.

The Leinster Rugby man has been in the form of his life and he has certainly brought that to international rugby. Recording a whopping 56 tackles in the five games he played, Van der Flier made his presence known on the pitch by being first off the line.

Scoring two tries in five games Van der Flier proved his attacking prowess just as much as his defence. The flanker also carried the ball for 264 meters. A man of the match and a nomination for player of the tournament cement his position on this list.

France’s captain and leader Gregory Alldritt can do it all. From disrupting at the breakdown to carrying the ball he is an immensely talented player. His work around the pitch and his leadership help drive France such as when the game got close with Ireland.

Besides Antoine Dupont, Alldritt has been France’s player of the tournament. Topping the carrying charts as he carried the ball for a massive 317 meters over the tournament, at a whopping 63 meters a game. 51 tackles compliments his all round game.

Player of the Tournament last year, Dupont was in fine form all tournament and is looking to make himself a back-to-back winner of that award.

His performance against Ireland just showed his value as he set up a try and finished one off. Against Scotland he was once again the best player on the pitch as he earned another Man of the Match.

In the final round clash with England, he helped secure his team the Grand Slam as he just ran the show for the entire game. Two man of the match awards and two tries cant convey enough the quality of this player.

The young successor to Owen Farrell, Marcus Smith is really proving himself for Harlequins and England. Smith once again put a phenomenal performance in against Wales to prove his youth has no bearing on his quality.

The top scorer in the tournament with 71 points in the five games he played. He scored two tries and converted 17 penalties. 408 meters with the ball in hand as well 27 tackles proves his effectiveness on the field. Definitely one for the future.

Villiere opened up his first round with a wonderful hat trick of tries against Italy. He continued his excellent form against the Irish as he shut down much of the Irish attack down his channel. While not adding to his try count for the rest of the tournament he caused 11 line breaks, five of which led to tries.

He made eleven tackles on the wing. His impact in the French backline was invaluable as they marched towards the grand slam.

Danty came into the centre of the French Backline and looked like he had played there for years. A brilliant partner for Gael Fickou, he was the battering ram to Fickou’s sword. He made 29 tackles in the four games he played throughout the tournament.

Danty was most effective carrying the ball, he made a whopping 224 meters from the no.12 position.

Hard not to pick Fickou as he is the engine that helps run the French backline. A constant scoring threat and a dogged defender, Fickou’s flair is an amazing asset to this French outfit. His try against Scotland proves just how dangerous he can be.

The defensive leader of the team, Fickou completed 40 tackles with a tackle success of 75% throughout the entire tournament. His attacking side is just as strong however as he scored two tries for his side. One being the catalyst for France’s dismantling of England.

Damien Penaud has been a brilliant part of the French backline scoring many tries for Les Blues. His performances against Italy, Ireland and Scotland have been mesmerising. Scoring two tries against Scotland at the weekend killed Scottish hopes of a chance to comeback.

Penaud scored a brilliant try against the Italians also to help put that game out of reach. He missed the Welsh game with Covid but returned against England like he never left.

Hugo Keenan has been the best Fullback of the tournament without a doubt. The only player close would be France’s Melvin Jaminet, but Keenan’s impact make it impossible to leave him out.

The Leinster man didn’t miss a tackle throughout with his positioning stopping most teams’ kick attacks as there was nowhere to go. Under the high ball he rarely came off second best and absorbed countless amounts of pressure for Ireland.

A try against Scotland help secure a bonus point win for the boys in green also. Throughout the whole tournament Keenan ran 388 meters with the ball in hand.

The post The 2022 Guinness Six Nations Team of the Tournament appeared first on Sporting Limerick.