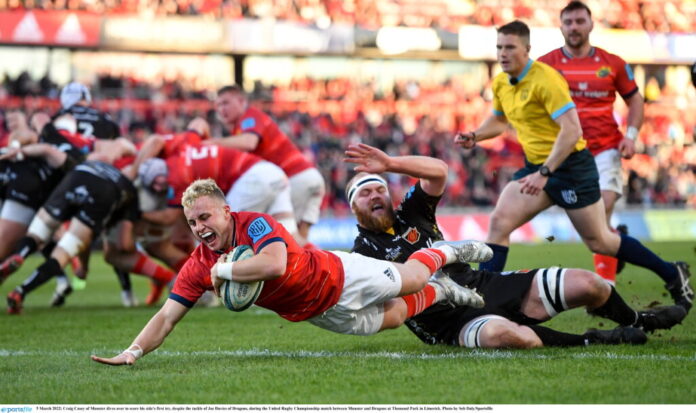 NOW back from two game slide in South Africa, Stephen Larkham spoke to media ahead of their game in Musgrave park this Friday.

Munster will be facing Italian side Benneton on Friday, where the red men look to get their season back to the heights it was at before two losses in South Africa.

Their first game in the tour was against the Vodacom Bulls and despite a second half fightback, they could only muster a losing bonus point.

Against the Lions, they suffered a similar fate.

The recent losses make Friday’s game against Benneton one of the utmost importance as Munster stay in the fight for the URC.

Ahead of the game against the Lions in Johannesburg, Munster Backs Coach Stephen Larkham was asked about his side’s performance on the day and the bitter result to the game,

“We put in a an amazing effort in that first 60 minutes. Some beautiful tries in that first half, unlucky with that try in the second half to be taken away from us. Then you could clearly see that we’d kind of spent ourselves at the 60 minute mark.

“It was really hard, the boys kept pushing and pushing but we just couldn’t quite hold on there. I think if we had a little more time on the clock, we started to find our rhythm again there just right at the end but it was too late.”

A big focus on the last two games has been the younger player Munster have had to use due to players on international duty.

This focus on younger players has really shined through and Larkham spoke of their impact.

“Yeah it’s been outstanding, Josh Wycherley in particular was outstanding, Some of the effort that he put in off the ball. Their two tries he was the one chasing them and then his set piece detail, his detail around the paddock and the energy he brings to the team was tremendous.”

“Likewise with Alex (Kendellen) I thought he had two tremendous games, he was cramping in that last game but put everything into every minute he had out there on the field and I thought both games he was tremendous for us”

Staying on the topic of young talent in Munster, Larkham was asked about the situation Jake Flannery find himself in after a confirmed move to Ulster Rugby.

Larkham was in full support of the player and of his skills on the rugby pitch as he said,

“Jake has improved out of sight he has a really good skillset as a 5-8 (Fly-half), Really good composure on the field and the boys are all around him.

It’s a similar scenario with the other 5-8s, it’s been a real pleasure working with the young 5-8s including Joey (Carbery) in the system here.”

“We have seen some really big benefits from Covid and being together and this last tour particularly with Jake, you know we had a really good opportunity to bond over that tour. There is a real tight knit feel in the team at the moment and Jake’s in the middle of all that”

Munster now look to face Benneton on Friday night. A win for the men in red is certainly the goal as Munster look to reestablish themselves once more in the URC.

The game takes Place at 7.35pm in Musgrave Park on Friday night.

Watch the full Interview with Larkham and also John Hodnett below!

The post WATCH | Stephen Larkham on benefits of SA trip and youth stepping up appeared first on Sporting Limerick.