Home Rugby Munster Highlights| Munster overcome The Exeter Chiefs to earn a spot In their... 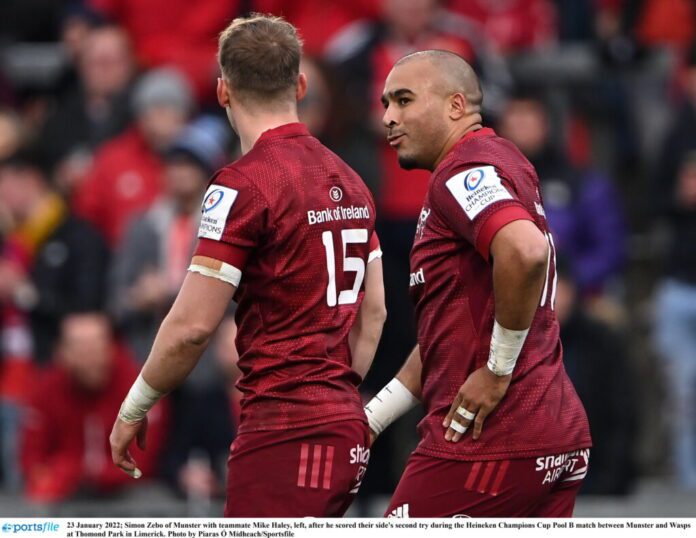 MUNSTER are through to a 19th Champions Cup quarter-final after their 26-10 victory that clinched a 34-23 aggregate win over Exeter Chiefs at Thomond Park on Saturday afternoon.

Munster and Exeter’s two legged round of 16 tie has come to a conclusion after the red province’s huge victory last Saturday. There were a number of standout performers for Munster with Joey Carbery scoring a try and kicking 16 points. Damian de Allende clinched the win with a late try after a brilliant Simon Zebo pass.

The Star of the Match was Peter O’Mahony after a captain’s performance that included breakdown steals, lineout steals and a speedy pass to set up Carbery for the first try.

Joey Carbery made it 3-0 after five minutes before a great defensive intervention from Damian de Allende, as he tracked back to catch Stuart Hogg’s chip over the top after a line break on the left wing.

Sam Maunder scored off a quick tap and Conor Murray was sin-binned for not retreating. Simmonds was off target with the conversion attempt. Mike Haley deputised superbly at scrum-half and the 14 men of Munster went 6-5 in front after Carbery’s second penalty on 17 minutes.

Munster were in for their first try on 25 minutes as Carbery jinked over after O’Mahony’s pass off the base of the ruck. Carbery’s conversion made it 13-5 as Munster took the lead in the tie for the first time at 21-18.

Simmonds was off target with a penalty on the stroke of half-time that would have levelled matters on aggregate.

Exeter piled on the pressure after the interval and Jacques Vermeulen just about grounded the ball from close range. Simmonds’ conversion struck the post but Exeter led 23-21 on aggregate.

A crucial counter-rucking effort, led by O’Mahony, won the penalty for Munster on 59 minutes and Carbery’s third penalty moved the hosts 24-23 ahead on aggregate. Carbery nervelessly slotted over from near halfway to make it 19-10 and 27-23 on aggregate when O’Donoghue was taken out by an offside player at the breakdown.

Craig Casey dinked down the right wing to get back into Exeter territory before the crucial second try from de Allende.

Haley threw the ball wide for Zebo with the Exeter defence stretched and the winger charged towards the line before slipping a beautiful pass inside for de Allende to finish well. Carbery was again on target and Munster held out for the final eight minutes to seal a great victory.

The post Highlights| Munster overcome The Exeter Chiefs to earn a spot In their 19th Champions Cup Quarter-Final appeared first on Sporting Limerick.