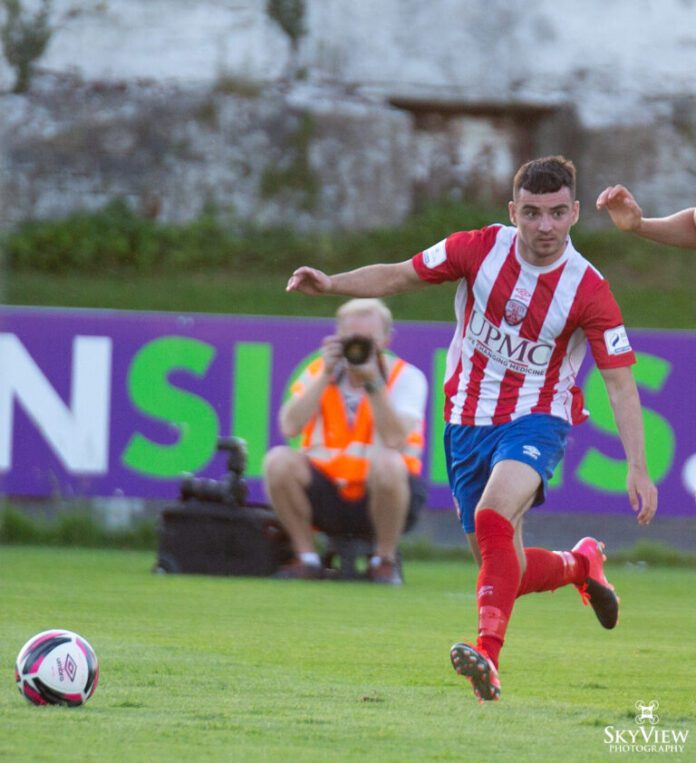 TREATY United picked up a dramatic 2-1 victory over Wexford FC at the Markets Field on Monday night and stretched their unbeaten run to 5 games in the Airtricity League First Division.

Enda Curran opened the scoring for Treaty and scored his fifth goal of the season to give them the lead before Aaron Dobbs looked to have secured a point for the visitors with an equaliser 15 minutes from time. However, Treaty were awarded a penalty in injury time and Steven Christopher dispatched the spot-kick to grab all three points.

Treaty made two changes to their starting line-up from the 1-1 draw with Athlone on Friday with Joe Gorman and Dean George dropping out for Jack Lynch and Callum McNamara. Lynch partnered Mark Walsh at centre-back but didn’t have a great start when Dinny Corcoran rolled the captain and forced Jack Brady into an early save.

Wexford began brightly with the front three of Corcoran, Conor Davis and Jack Doherty causing problems and it was the latter who latched onto a ball over the top but he fired wide. Treaty’s first chance was created by Joel Coustrain who squared the ball to Lee Devitt but the midfielder fired over. Despite a positive start, Coustrain would be replaced later in the half with a hamstring issue.

Wexford netminder Alex Moody was called into action when Joe Collins venomous strike was turned out for a corner by the recently selected goalkeeper. Another decent build up from Wexford culminated in Corcoran being denied by Brady once more.

On the half hour mark, Treaty grabbed the lead as Lynch won a header in the penalty area and as Wexford failed to clear, Enda Curran rifled the ball into the net from close range to the delight of the small crowd in attendance.

In comparison, the second half was a very scrappy affair with little to no clear cut chances created by either side. Just as it looked like the game was petering out with a narrow victory, substitute Aaron Dobbs popped up at the back post to powerfully head home a right-wing cross.

In truth, at this point the visitors looked most likely to snatch all three points but Tommy Barrett’s decision to introduce Willie Armshaew proved an inspired one as he latched onto a perfectly waited clearance from Brady which was missed by Adam Wells and he was upended in the penalty area by Moody.

Referee Eoghan O’Shea took his time but gave the penalty to the home side and Christopher scored his second vital goal in four days to give the home side a valuable victory. As a result, Treaty move up to fourth place in the table before Saturday’s meeting with third placed Longford Town at Bishopsgate.