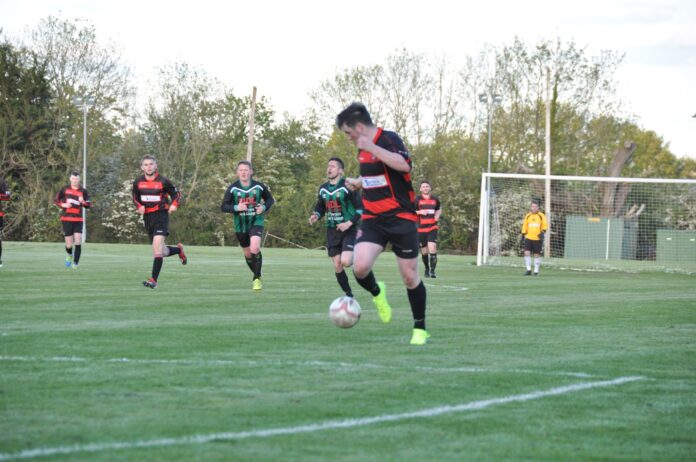 MUNGRET Regional took a big step towards securing the first ever Limerick District League Premier Division Shield with a emphatic 1-5 victory over Janesboro at Pearse Stadium on Thursday night.

Mungret had five different goal scorers with Evan Barrett, Eoin Ryan, Cian McNicholas, Sean Ezekennagha and Pa Ahern all scoring during the victory while Conor Madden scored from the penalty spot for Janesboro.

Both sides were separated by just one point before the game and were both in good form heading into the clash. Also, both sides employed a 3-5-2 system but Mungret were quicker out of the blocks and Ahern picked out Stephen Hackett with a cross field ball but the wing-back dwelled on the ball for too long and allowed Browne to block the shot.

Just five minutes later, Janesboro made the visitors pay as Dermot Hughes latched on to a through ball and goalkeeper James Roche upended the former Corbally man with referee Dermot Broughton wasting no time in pointing to the penalty spot. Conor Madden duly slotted the penalty away to give his side the lead.

Mungret responded exceptionally well and equalised within five minutes when a back-post cross from Ahern was powerfully headed into the bottom corner by Evan Barrett. With ten minutes remaining in the first half, Mark Patterson and Kieran Long exchanged big chances for their respective sides but neither managed to convert.

Mungret were the side with the greater urgency throughout the second period and were rewarded when Eoin Ryan headed home from a free-kick on the hour mark.

Just three minutes later, Richie Burke’s side extended their lead further when Cian McNicholas brilliantly converted a free-kick into the top corner. Substitute Sean Ezekennagha got in on the act when he played a neat one-two with McNicholas at the edge of the area before rifling a low shot beyond the helpless Browne.

Janesboro were reduced to ten men when Aaron Grant was shown a second yellow card and their misery was complete when Ahern reacted quickest to Gary Kelly’s superbly struck shot which rebounded off the crossbar to tap home from close range.

Mungret are now four points clear of Janesboro with just three games remaining in the hunt for the newly created honor and it has been a much improved second half of the season from Burke’s side and the manager paid tribute to his team after the game for their performance.