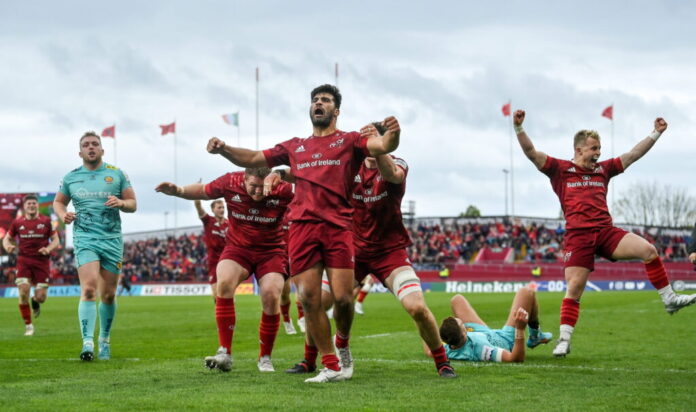 THE Aviva stadium will host the clash of European giants Munster and Toulouse this Saturday in the Champions Cup.

In a repeat of last year’s contest, a place in the Champions Cup semi-final will be on offer when Munster and Toulouse lock horns this Saturday.

Twelve months ago, the French men got the better of Munster behind closed doors in Thomond Park before going on to win their fifth European title.

But with revenge on the mind, Munster are going into this weekends quarter final clash with a good bout of form under their belts since winning against the Exeter Chiefs in the Round of 16.

Johann van Graan’s side most recently defeated the Cardiff Blues last weekend 42-21 in the URC. Having found themselves down early, Munster regrouped for the win to maintain their place at second in the domestic table with one round of games to play.

However, facing Toulouse this weekend will be an incredible task no matter what form the red men are in as they take on the defending champions. With superstars like Antoine Dupont and Romain Ntamack, Munster will have their hands full from the very first whistle.

Ahead of the clash, Head Coach Van Graan knows the difficulty himself and his side will be facing in their quarter final this weekend.

Playing last years champions in Toulouse will be no easy task and Munster must be extremely well prepared to take down such a strong team.

“It’s a massive challenge for us. Number one, you play the reigning Champions Cup champions, the French top 14 champions. They have got ten guys in that team that have won the Six Nations, Dupont has been the player of the Six Nations.

“Then if you look back in history, Toulouse have won their last four games against Irish opposition in Ireland in knockout games. That just needs to tell you the task that is ahead and that’s something we are embracing and we are looking forward to. It’s our 10th successive game in a row and we worked for this one and I am really looking forward to it on Saturday afternoon.”

The clash against Cardiff will have provided much needed momentum ahead of the trip to Dublin this weekend and with no injuries from the game, it has been pretty much smooth sailing for the red province in preparation for the game.

“We had a good win on Friday evening so we had a good weekend of recovery. We reconvened yesterday morning, literally just came from the training field there so preparations are all running smoothly and obviously no big injuries from the weekend.

“We have one or two players back in training and we have got an off day tomorrow. Back training on Thursday and then we will make our final decision’s on selection, a few tough ones to make which is a great position to be in. We will then travel down to Dublin on Friday and then finish off our preparations for the game on Saturday”

Watch the interview with Van Graan in full, as well as words from Damian De Allende and Jack O’Donoghue below.

The post WATCH | “It’s a massive challenge for us” | Johann van Graan under no illusions as Toulouse await in Champions Cup quarter-final appeared first on Sporting Limerick.