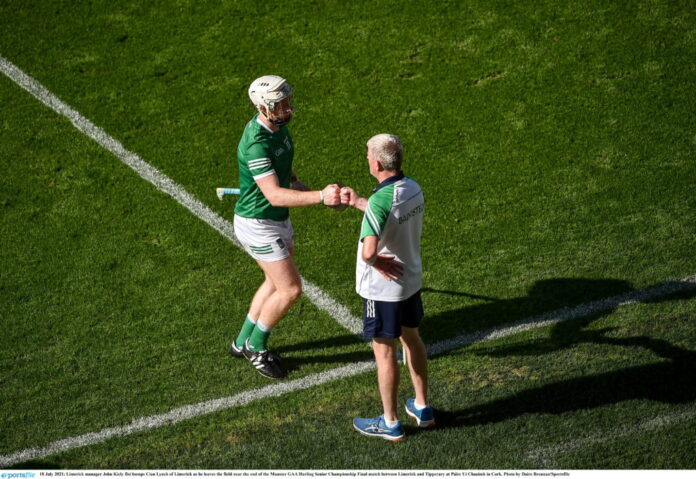 ONE of Munster’s great rivalries has been largely one sided in recent years.

Limerick can book their place in the Munster final this Sunday as they welcome Tipperary to the TUS Gaelic Grounds in the third round of the provincial round robin.

John Kiely’s men will be looking for a repeat performance when these sides last met, the 2021 Munster final, when a second half blitz from the Shannonsiders overturned a ten point deficit into a three-in-a-row of provincial titles.

It continued a trend of Limerick’s dominance in the fixture with just one championship loss to the premier county since the round robin introduced, their 2019 clash when both sides were ensured progress to the Munster final in the aftermath.

Limerick gained revenge a fortnight later in the decider and repeated the trick in their Munster last four clash in 2020.

A fourth successive loss to Limerick will ensure another Munster final berth for the Treaty men while extinguishing the miniscule hopes of Tipp’s progression.

But ahead of Sunday’s meeting, we look back on the five most recent championship clashes between the great Munster rivals.

Barry Murphy’s late strike was vital as John Kiely picked up his first win as Limerick manager in the first round of the 2018 Munster championship.

Dan McCormack had the games first goal after 20 minutes as the sides traded the lead throughout the first half hour.

A back and forth first half saw Tipp take a slender 1-10 to 0-12 advantage into the dressing rooms.

By the 50th minute, the Limerick lead was three but this was wiped out by Jason Forde’s well taken goal.

Noel McGrath pulled Tipp in front on 58 minutes but Limerick would hold Tipp to just one more score in the game.

Cian Lynch gave Limerick the lead in the 61st minute with Barry Murphy grabbing the goal five minutes later to push them five clear and seal the win.

Assured of their place in the knockout stages, a much changed Limerick side fell to a rejuvenated Liam Sheedy and Tipp in the final round of the 2019 Munster championship.

The changes affected Limerick’s rhythm with John Kiely’s side out of sorts in the opening half.

Despite this, Tipp struggled to pull away from the visitors.

Jason Forde did give them a four point advantage after 23 which they retained for a 0-12 to 0-8 lead at the break.

Graeme Mulcahy’s introduction gave Limerick a boost as they got the first scores of the half.

But Seamus Callanan would get his customary goal quickly after to reassert Tipp’s dominance.

Limerick did battle but could not get within three of Tipp as the sides traded scores throughout the second period.

Tipp would go six clear heading into additional time with Limerick grabbing the final two scores of the day.

Results elsewhere meant the sides would meet again a fortnight later in the Munster final at the Gaelic Grounds.

Limerick were in irresistible form in front of a packed Gaelic Grounds to claim a first Munster title since 2013 as they put Tipperary to the sword in the second half.

After the win in Thurles two weeks previously, Tipperary picked up where they left off as Seamus Callanan’s goal midway through the half gave them a 1-6 to 0-4 advantage.

The sides picked off a number of scores each before Limerick pulled two clear, 1-11 to 1-9 at the half time whistle.

Limerick moved four clear to start the half but Tipp were level with 26 to play after John McGrath goaled.

Limerick didn’t seem perturbed by the setback and made light work of Tipperary from here on in.

The gap was three on 54 minutes when Kyle Hayes grabbed Limerick’s second goal of the day to give them daylight at 2-18 to 2-12.

Nickie Quaid would save at point blank range from Callanan as Limerick rattled off six successive scores.

In the end the margin was 12-points as the Limerick faithful once again stormed the Ennis Rd pitch.

Limerick got one over on Tipperary in a stormy Páirc Uí Chaoimh in November of 2020. Limerick got the perfect opportunity to put their talents and athleticism on show against a Tipperary side that struggled to keep up.

It was the free-taking ability of Jason Forde and the early goal from Jake Morris’ after 20 minutes that kept Tipperary in the game, however it did little damage to the well oiled machine that was the Limerick defence.

Tipperary enjoyed a period where they trailed by a mere point, however that was short lived as Aaron Gillane found the back of the Tipperary net. Limerick kept their foot on the gas until half-time, outscoring Tipp by 8 points to 3 to lead by 1-17 to 1-8 at the break.

In the second half, the efforts of Niall O’Meara and Jason Forde narrowed the gap to a manageable 6 points. However, the wind was taken out of Tipperary’s sails as the Limerick attack pilled on the pressure. Regardless of John McGrath’s goal for Tipp, the substitutions of David Reidy, Seamus Flanagan, and Pat Ryan gave Limerick an extra gear to keep Tipp pinned back into their own half.

The fresh legs of David Reidy and Seamus Flanagan saw Limerick’s lead extend and the clock approach full-time. The dominant Limerick side sealed the final scoreline of 3-23 to 2-17 over a bland Tipperary.

Limerick produced one of the great comebacks as a third quarter-blitz swung a tantalising Munster final with John Kiely’s men securing a three-in-a-row with a 2-29 to 3-21 victory in a sun soaked Pairc Ui Chaoimh.

That outcome seemed highly unlikely as Tipp took the game to Limerick, leading by ten at the break.

Goals from Jake Morris and John O’Dwyer had Limerick shellshocked as they struggled against the Tipperary tide.

And retreating to the dressing rooms, Tipp’s lead was not only 2-16 to 0-12 but full deserved.

However, Limerick came out a different team and by the second waterbreak, the lead had been evaporated as they outscored the premier county 1-10 to 0-1 in seventeen exquisite minutes.

Seamus Flanagan set out the stall, pouncing for Limerick’s first goal after Aaron Gillane’s effort had been well stopped. That had Limerick 1-22 to 2-17 ahead at the final break.

Then up stepped Kyle Hayes with a contender for best goal of all time with a stunning solo effort that began on his 65′ and finished with the Kildimo Pallaskenry man batting to the net.

That effort completely took the wind from the Tipp sails as Limerick cruised over the line to retain their title for the third successive season in devastating fashion.