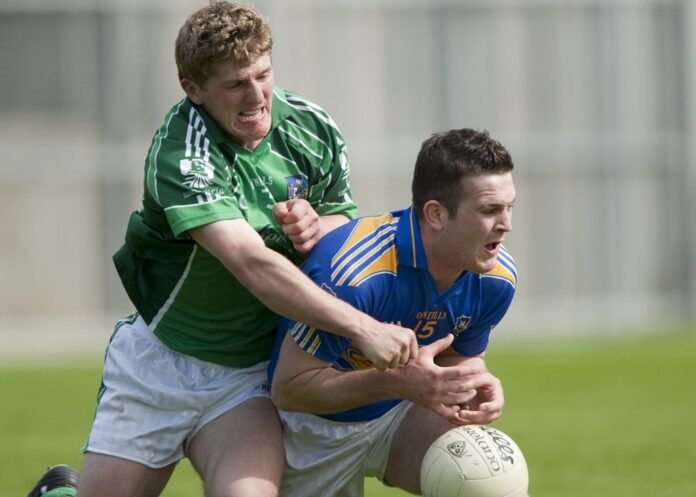 LIMERICK and Tipperary face off this weekend in the semi-final of the Munster Senior Football Championship.

Limerick travel to Semple Stadium this Saturday at 7pm to face Tipperary with a place in the Munster final up for grabs.

Kerry await in the decider after defeating Cork at the weekend. Limerick and Tipperary came through Clare and Waterford respectively to set up the last four tie.

The last time the two sides met was in 2020 where Tipperary overcame the Treaty men late in extra time on the Ennis Road, gaining revenge for the Limerick win the year previously in Saturday’s venue.

The sides have been evenly matched in their last five fixtures with Limerick winning three and losing two of the games since 2008.

And ahead of Saturday’s semi-final, we take a look back on the five most recent championship fixtures between the two sides.

Seanie Buckley’s goal would prove crucial as Limerick moved into the Munster football semi-final for the fifth time in six years.

While Declan Browne hit 1-4 for Tipp four years previously, this time Barry Grogan would match that feat for the losing side.

Limerick were more tenacious throughout the game with everyone wanting to get on the scoresheet for Mickey Ned O’Sullivan’s side with six different scorers putting up the 1-8 scoreline for Limerick.

Limerick would later fall short in the semi-finals where they lost out to Cork 2-9 to 0-12.

Limerick made it successive Munster quarter-final wins over the Premier county despite a poor second half showing.

An early goal from Ian Ryan helped Limerick gain a 1-6 advantage over the slow starting Division 3 champions who managed 0-0 in the same time.

Heading into half time Limerick looked comfortable in the driving seat with a ten point advantage before Tipperary grabbed a goal on the stroke of half-time making it 1-8 to 1-1 in the visitors favor.

Tipp would reduce the deficit to just two before Stephen Lucey got Limerick’s first of the second period after 55 minutes.

That appeared to calm Limerick who traded scores with their visitors down the stretch to set up a semi-final with Clare.

Limerick would overcome the Banner but fell to Cork in the final by a solitary point.

Barry Grogan and Philip Austin produced the goals for Tipp which proved the difference as the visitors moved past Limerick in the championship for the first time in 16-years.

Grogan’s goal gave Tipp a healthy 1-7 to 0-6 lead at the break with Austin’s effort three minutes into the second half helping the Premier into a nine-point advantage.

Eoin Hanrahan found the back of the net from the penalty spot with ten minutes to go but the margin was still at six points and the battle was all uphill from there for the hosts.

Limerick would have to wait a further five years for a Munster championship win.

Three goals in the second half was the difference as Limerick defeated their hosts for their first Munster championship since 2012.

Goals from Iain Corbett, Cillian Fahy and Peter Nash would help see off Tipp in Thurles to give the Treaty a first championship win of any kind in three years.

The Shannonsiders raced out of the blocks and into a 0-6 to 0-4 lead but quickly found themselves level at half-time.

Limerick were up by a point when Corbett slotted one into the back of the net giving the visitors some breathing space.

Michael Quinavin replied with a goal for Tipp but Nash’s late effort would prove the icing on he cake as Limerick powered into the Munster semi’s.

7 November 2020 in the LIT Gaelic Grounds

Tipperary just outlasted Limerick in the Gaelic Grounds with one point separating the sides after extra-time in an absorbing encounter.

Limerick looked to have the game won in normal time only for a wonder strike from Conor Sweeney sending the game to ET where the visitors grabbed the initiative.

The early contest was very tentative with both sides feeling each other out, trading score for score before Limerick bagged a goal on the 26 minute mark from Sean McSweeney.

The second came just prior to the break through Cillian Fahy putting Limerick up 2-6 to 0-5 at the interval.

Tipperary came out with a new surge of confidence in the second half reducing the margin to one point at the water break through scores from Jack Kennedy, Sweeney and a Liam Casey goal.

But with a minute to go Cian Sheehan slotted what looked like the winner before some great individual skill from Sweeney levelled the game from a free out on the side-line.

The sides again proceeded to trade scores in extra time and the game looked set to go to penalties for the first time ever in the championship before Brian Fox scored in the dying seconds to give Tipp the win as they went on to win a first Munster title in 85 years.