A FATHER-of-two was jailed for 12 years earlier today after a court heard he fired four shots into a relative’s house where infant twins were sleeping.

Larry O’Connor (33) with an address at The Lodge, Great National Hotel, Ballykisteen, County Tipperary, fired two shots using a pump-action shotgun at his first cousin Danny Harty’s home, before breaking into the house and firing two more shots inside.

Mr Harty and his partner, Noreen Dooley, were asleep with their ten-month-old twins in an upstairs bedroom with when the premeditated gun-attack occurred at their home, at Deelside, The Quay, Askeaton, County Limerick at around 3.30am, on July 13, 2019.

Larry O’Connor was driven to and from the scene by his older brother Daniel O’Connor (42) of Hassetts Villas, Thomondgate in Limerick City.

Larry O’Connor initially fired shots from outside the two-storey house hitting guttering just above a balcony outside the victims’ bedroom.

He broke into the house, firing a shot into the kitchen, hitting a fridge and a window. He also fired a shot up through a ceiling onto the first floor, where the victims had been asleep, but no one was injured.

Gardaí said they believed the shooting was linked to animosity between the Traveller cousins.

Mr Harty had previously lived with the two accused men who are his first cousins, and he had been in a previous relationship with a sister of the two defendants and had fathered two of her children.

He was convicted by a jury following a two-week trial before Limerick Circuit Criminal Court last March.

Daniel O’Connor was  jailed today for seven years with the final year suspended. He admitted one count of burglary with intent to committing reckless discharge of a firearm during the early stages of the trial.

However the prosecution accepted he did not fire a shot nor enter the house on the night.

Larry O’Connor who is currently serving a two-year sentence for a separate burglary in Kerry, had 79 previous convictions, while Daniel O’Connor had 38 convictions, mostly for road traffic offences.

The court heard while Larry O’Connor does not accept the jury’s verdict against him, Daniel O’Connor wrote a letter of apology to the victims and was remorseful.

Judge Pat Meghan said he could not reduce any part of Larry O’Connor’s sentence due to him showing no remorse nor accepting he was the gunman.

“This was clearly a premeditated attack. A gun and ammunition were sought. The car did not have registration plates. The gun was not found and the defendant’s face was covered. As he occupied the house, Noreen Dooley, Daniel Harty and their ten month old babies were vulnerable and asleep. There was also the use of a firearm and the discharging of four shots,” the judge said.

Both defendants were given credit for having already served fifteen months while awaiting the outcome of their case.

Noting the victims were not in court nor had they provided Victim Impact Statements, the judge said, “one can only imagine the terror outlined by Noreen Dooley in the 999 call, and the lasting effect it has had”.

In an interview after the gun attack, Noreen Dooley outlined how they leaped from their bed and hit the floor to try to escape the gunfire.

“My children were on the floor and they were actually screaming their eyes out, the bangs alone would have frightened them. They’re only babies.”

Ms Dooley said Mr Harty tried to protect their twin son and daughter as bullets were fired into their house.

“He grabbed the twins and sat on the floor just in case the attackers came into the room. He had his hands wrapped around them on the floor, and his back was up against the bedroom door to try to stop them coming in”.

The couple’s other two-year-old son was on a sleepover at a relative’s house at the time.

Showing the bullet holes in her home, she said: “Until the day I go to my grave I will never forget what I went through inside in the bedroom with my kids. It’s hard to describe. I genuinely thought they were combing through to kill us,” Ms Dooley added. 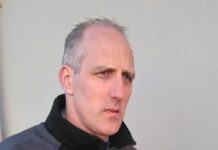