Munster Rugby and the IRFU have confirmed that Denis Leamy will join the province as Defence Coach on a three-year deal on completion of his time with Leinster Rugby.

The appointment sees Graham Rowntree’s coaching ticket take further shape for next season with the already confirmed Mike Prendergast and Andi Kyriacou on board as the respective attack and forwards coaches.

Speaking to Leinsterrugby.ie on his decision to leave the province, Leamy said,

“It’s been a very enjoyable few years with Leinster Rugby and I’d like to thank the club for the opportunity to join, first as an EPDO and over the last while as a Contact Skills Coach.

“I have thoroughly enjoyed my time working with players down in the Centre of Excellence and then up in UCD and trying to add to the environment and to the development of the players as best I can. I feel I have developed myself as a coach working with Leo and the rest of the coaching and backroom staff and this season in particular will live long in the memory.

“Finally, I’d like to thank the players, in particular, for a brilliant three years at Leinster.

“The opportunity to continue my coaching career and to join Munster Rugby and be closer to home, is an opportunity that I feel I have to take to grow as a coach and for family reasons and I look forward to working with Graham and the rest of the team there in due course.”

As a player, Leamy made 144 appearances for Munster following his debut in 2001 as a 19-year-old. He won a pair of Heineken Cup titles in 2006 and ’08, scoring a try in the latter, as well as securing three domestic titles.

He also made 57 caps with Ireland, picking up a Grand Slam as well as featuring at a pair of World Cups.

On the provincial front the Tipperary native also worked at various stages with Munster’s age-grade players and the ‘A’ team before making the move to Leinster where he initially joined as an Elite Player Development Officer in 2019.

He was also involved with the Tipperary Senior Hurlers when they won the All-Ireland in 2016.

He was appointed to his current role of Contact Skills Coach with the Leinster Senior Squad at the start of the 2021/22 season and was also named as Assistant Coach for the Ireland U20s Six Nations campaign last year. 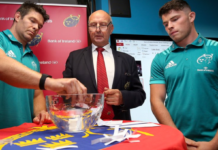