FIRST term councillor Olivia O’Sullivan has been elected chairperson of the Limerick Metropolitan District as a result of a power sharing agreement between Fine Gael and Fianna Fáil.

She is the third woman to be elected to the position in the past three years, succeeding Fianna Fáil’s Catherine Slattery who secured the chain of office from Fine Gael’s Sarah Kiely.

Cllr O’Sullivan, who was elected in the Limerick City North area in 2019, is a former columnist with the Limerick Post and works as a marketing and communications consultant. 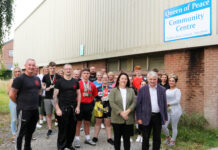 Limerick Combat Gym in a fight for survival