THE Irish Community Air Ambulance, which airlifted 17 badly injured patients to hospital in Limerick and Cork from various incidents during the month of May, has responded to the highest number of road traffic collisions in a single month since the organisation first launched.

Munster has benefitted most from the service which has brought patients long distances from accident sites to hospital.

The Helicopter Emergency Medical Service (HEMS) Air Ambulance was tasked to 15 separate incidents during May. This equates to one  almost every other day.

The increase in accidents has pushed the number of callouts for the helicopter up by 14 per cent when compared to April. The service is also facing increasing fuel costs.

To help keep the helicopter in the air and to support the expansion of its ground-based Volunteer Doctor service, the Irish Community Air Ambulance has launched a major fundraising drive with support from RTÉ presenter John Creedon.

Cork accounted for one in four of the calls followed by Kerry, Tipperary, Clare, Waterford, Wexford, Limerick and Carlow. In total, 17 people were airlifted to hospitals in Cork and Limerick during May.

The Irish Community Air Ambulance is encouraging people to host a BBQ or coffee morning during July to raise vital funds for the organisation.

Chief executive Micheál Sheridan said, “The summer is the busiest time of the year for us and we’re already seeing the number of calls increasing. To be tasked to 15 road traffic collisions in one month is concerning and equates to a serious crash every second day.”

More information about hosting an event or to donate here 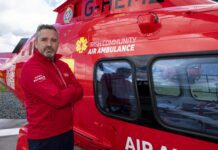