LIMERICK City will burst into life today to become a sea of colour, music and spectacle for the first physical Pride Parade in three years.

This year’s Grand Marshall is historian and author Sharon Slater, who has been researching Limerick history for the past twenty years. She is the author of multiple publications, most recently ‘100 Women of Limerick’ and  is currently the Historian-in-Residence at Ormston House.

Sharon will lead out a host of floats, musicians and participants wearing every colour of the rainbow along an altered parade route which has been necessitated by construction works on O’Connell Street.

Participants will gather at Pery Square at 12.20 pm for floats and 12.50 pm for groups. The Parade will leave at 2 pm, making its way across Mallow Street to Henry Street, past Arthurs Quay Park and ending at the Hunt Museum for the annual Pridefest event.

The Pridefest Party will begin directly after the parade finishes at a lavish marquee in the Hunt Museum gardens from 3 to 6 pm.

The event is free and family-friendly, with a bouncy castle for children, a cone van, a café, and a bar on site. There will be live music and plenty of entertainment including the annual Tea Dance with well-known Limerick actor, director and playwright Myles Breen.

The Limerick Pride Climax Party will take place at Dolan’s Warehouse tonight from 8:30 pm with a stellar line-up of fantastic acts with RuPaul’s Drag Race star Courtney Act as the headliner.

Supporting Courtney is Sarah McTernan, former The Voice of Ireland contestant and Ireland representative at the Eurovision Song Contest and Limerick’s own burlesque artist Miss LaVelle will also make an appearance on the main stage.

The event will be hosted by Victoria Secret,  joined by the rest of the Dragged Up team – Paul Ryder, Regina George and Pixxie. 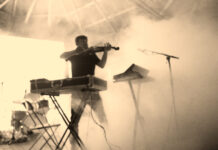 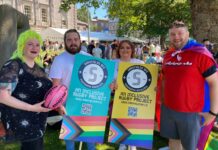 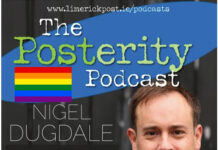