LIMERICK Gardaí are on the trail of an opportunist thief who stole a Kilmallock woman’s purse from her car.

But it’s highly unlikely that the culprit is a GAA fan because although they took her cash from the purse, they left two tickets for the Limerick All-Ireland semi-final clash with Galway behind.

Garda Crime Prevention officer Sgt Ber Leetch told the Limerick Post the woman discovered her car was open but as her handbag was still in the boot, she though all was okay.

“Later she got a text from a person saying they found her purse in a playground. She went to collect it and saw that her cash was gone but her two tickets for the All-Ireland hurling semi final were still there.

“I know the cash was a loss but at least she got to the match and saw Limerick make it into the final,” Sgt Leetch added. 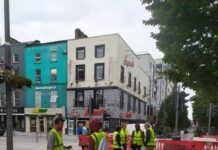