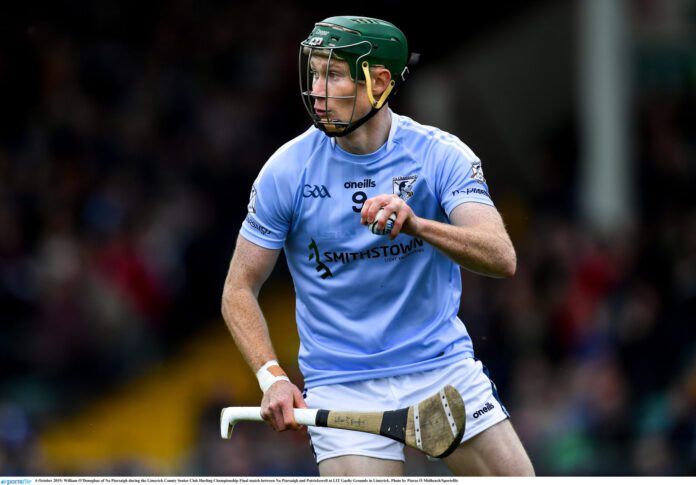 NA Piarsaigh cement themselves as the team to beat in this years Bon Secours Hospital Limerick Senior Hurling championship after close encounter with defending champions, Kilmallock.

Na Piarsaigh hit the ground running with an early goal from David Dempsey and continued their momentum until half time where they went in five points up with the scores at 1-12 to 0-10. Micheal Houlihan scored seven frees for Kilmallock, keeping his side within touching distance.

Kilmallock rallied for the second half and scored three unanswered points before they took the lead going into the last fifteen minutes with a goal. Na Piarsaigh managed to overcome adversity and comeback to grind out a crucial victory, with points from David Dempsey, Kevin Downes, Mike Foley and Adrian Breen in what could be a crucial result. The final score was 1-19 to 1-18 and sees Na Piarsaigh go top of the Bon Secours SHC Group 1.

Elsewhere Doon bounced back from defeat in the first round with a win against Adare. Adare, who drew their first-round match with Ahane started quickly with a goal from John Fitzgibbon which had the side up 1-2 to no score. Adare grew into the game and a goal from Pat Ryan put his side ahead. They continued their momentum into the second half and ran out six-point winners.

Patrickswell suffered a heavy defeat to Kilmallock in the first round and were looking to bounce back in their clash with Ahane. Jordan Higgins goals either side of the half helped his side to victory along with a flurry of nine other scorers. Dual All Star, Tom Morrisey scored fifteen points for Ahane but it proved not to be enough.

In Group 2 Ballybrown remained unbeaten to go top in a clash with Mungret St Pauls. Newly promoted Mungret dispatched of Kildimo-Pallaskenry in their opening round but could not continue the winning form into the second round against their neighbours.

Kildimo-Pallaskenry got their championship up and running with a win against South Liberties. Inspired by points from Kyle Hayes and Barry O’Connell, saw their side to a comfortable 0-18 to 0-11 despite ten wides in the first half leaving their opponents within striking distance going in at the break.

Garryspillane mounted a comeback to overcome rivals Blackrock and stay in contention in Group 2. Blackrock fall to the bottom of the pile after suffering defeat for the second week running. Blackrock led going into the last fifteen minutes and then a long distance goal from Garyspillanes, Paddy Kennedy cut the deficit to a point before Garyspillane used that momentum to run out 2-17 to 1-18 winners.