THE PEOPLE who started the first movement to preserve the old railway routes in county Limerick, which have now become the Limerick Greenway, have been left furious by a description on the Council’s Greenway website.

But on the Council’s website description of one section of the trail recently, it stated that the people could learn about the “transformation of the Limerick Greenway from an old, overgrown derelict path to a stunning 40k outdoor amenity.”

The ‘before’ picture accompanying the description was of the pathway past Ardagh Station House, which the Great Southern Trail Ltd (GST) members say they had already restored at the time.

“We are very angry about this picture being used with that description after all of the work we put in at the very outset when no-one else was talking about a trail or a greenway,” said Liam O’Mahony, chairman of the not-for-profit company.

The GST founders were the first to go about dealing with Irish Rail, who still own tracts of the trail, to ensure that the railway route and trail would not be subsumed into local farms after rail use was discontinued.

“Whoever wrote that description has no knowledge of the background to all of this and can’t have done any research on it, yet it was allowed to be put up in public.

“The ‘before’ picture shows a scene that is anything but overgrown and derelict. That is because of the work we put in.”

When contacted by the Limerick Post, a spokesman for Limerick City and County Council said that he had brought the matter to attention and the description was “published in error.”  It has since been changed on the website.

In a separate issue, the GST say that following the publication of the opening of the Foynes Rail tender by Irish Rail last week, “it is important that the tendering process includes the cost of providing a Greenway parallel to the tracks as is commonplace in the USA and Europe”.

“This is the only way to extend the Fenit-Listowel-Rathkeale Greenway to Limerick city, which will be 100 per cent off road.” 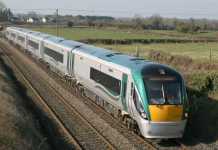 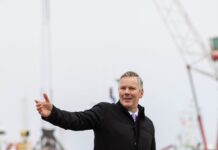