WE BREED ’em tough in the Limerick Post and none come tougher than former Post news editor Anthony Galvin. Anthony, leaving the relative comfort of the newsroom behind, is set for a life of adventure that’s about to take him way beyond the North Pole.

World-renowned explorer Jim McNeill has chosen the journalist, writer, and children’s entertainer to take part in the Ice Warrior #LASTPOLE Expedition, one of the most important and ambitious polar expeditions of our time.

What’s the challenge Anthony and Jim are set to mount? To become the first people ever to reach the Northern Pole of Inaccessibility and collect vital climate change data en route.

Fledgling explorer Anthony (56) is a man with numerous strings to his proverbial bow. As well as working for many years in journalism in Limerick, he has published a number of thrillers and factual books, including Family Feud – an account of Limerick’s gang troubles.

The former O’Connell Avenue resident Anthony said: “Since my teens I have had an obsession with the Arctic, reading everything I could get my hands on, and even writing a book about the search for the pole myself”.

“It is so exciting to finally get onto the frozen polar sea and experience it first hand. And the scientific aspect of the trip is an added bonus,” he added.

Having been selected for the Ice Warrior #LASTPOLE Expedition, Anthony is undergoing an intensive training programme to take on one of four 20-day legs, pushing the route across the Arctic Ocean.

Startlingly, he’s beginning his training despite having just had a hip replacement operation following an injury received while taking part in the gruelling selection process for the polar trip in Dartmoor earlier this year.

Expedition leader and Ice Warrior founder Jim McNeill said of the former Post news editor: “I’m delighted to have Anthony in the expedition team and look forward to training him in every aspect which will make him a competent polar traveller.”

The whole journey will take Anthony nearly 1,300 kilometres from the northern shores of Canada. Defined as the furthest point from land on the Arctic Ocean, and therefore its centre, the Northern Pole of Inaccessibility remains the last truly significant place in the polar regions yet to be reached by  humankind. It is over 270 miles further than the Geographic North Pole.

The expedition is not only a record-setting adventure but will be gathering crucial data on the condition of the ocean for the NASA-funded National Snow and Ice Data Center (NSIDC), led by Nobel Prize-winning scientist Walt Meier.

These, along with weather data,  measurements of pollution, and the counting of polar bears that may be encountered, contribute to the frontline research on climate change Anthony is set to embark on and give the whole endeavour a huge sense of purpose for the team. 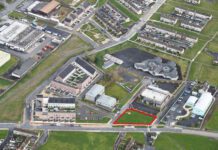 Green light for new playground and fitness area in Southill