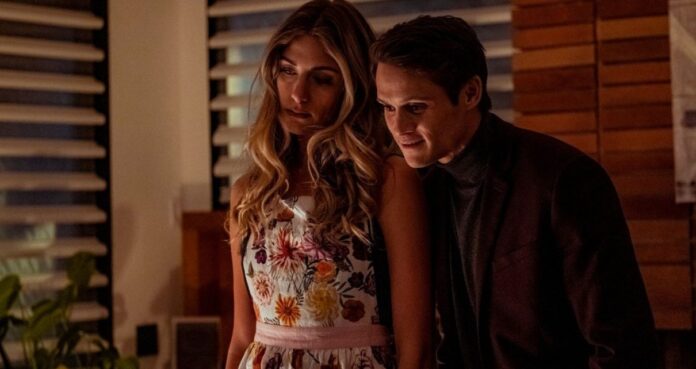 ‘WHO Invited Them‘ is a tense home invasion thriller with a disquieting Hitchcockian feel to proceedings.

Adam (Ryan Hansen) and Margo (Melissa Tang) seem to be the couple who have it all. The film opens at a house party in their swanky new villa in the elitist Hollywood Hills suburbs, which just screams Manson Family from the get go.

The couple’s new posh address is another notch to measure their happiness and wealth, but Margo has reservations, and feels they just might be rubbing it a little too hard in other people’s faces.

Their staid house party is about as lively as a moonlit cemetery and Adam’s need to impress his office colleagues with their new home doesn’t go down at all well as people quickly make their excuses to leave.

One couple, referred to as the ‘stylish funeral couple’, who neither Adam or Margo invited to the housewarming bash, linger on and, after a rather awkward introduction, hit it off and decide to party on into the night.

The mysterious couple Tom (Timothy Granaderos) and Sasha (Perry Mattfield) have all the appearance of a young, beautiful, and successful pair of LA movers and shakers that talk the talk and walk the walk. They simply ooze charisma and charm.

Tom initially tells Adam and Margo that they are neighbours from across the street, and that were on their way over to complain about the noise but when they arrived decided to just enjoy the party.

As the drinks and conversation flows through the night, a palpable tension grows and tales are recanted of a gruesome murder that took place in the lavish home 17 years ago. The story goes that the owners were butchered in front of their two children, who were themselves never to be seen again.

Of course, where this is all leading is fairly obvious, but doesn’t hamper our enjoyment of this entertaining thriller, now on Shudder.

Not quite in the same league as ‘Knock Knock‘, but still worth inviting into your living rooms.