AS THOMOND RFC celebrate their achievements both on and off the field over the last 78 years, another battle is about to unfold – this time in the form of a unique Thomond RFC Lip Sync Battles event set to take place at the Greenhills Hotel on Friday October 21.

This event promises to be a night of fun and entertainment with Thomond players both past and present, friends, and guests banding together to help raise funds for the critical development of Thomond RFC’s facilities.

The improvement of facilities will in turn help support the young men, women, boys, and girls of Thomond RFC to realise their full potential of a life in sport through rugby.

President of Thomond RFC Colm Kerley said that “the club was founded in 1944 to provide the opportunity to play rugby in its local and surrounding community. Today, its purpose has not changed much”.

“Working together in honour of our predecessors, we have to strive to continue with the further development of our facilities and crucially increase player participation particularly at under age level and to present everybody with the chance to play rugby within our community and beyond.”

Director of Rugby at the club Michael Grimes pointed out that “the royal blue jersey of Thomond has provided players at the very highest level for Munster, Ireland, and even the Lions”.

“Keith Earls has captained Ireland to victory on New Zealand soil, which was a milestone moment for both Keith and the club with Keith reflecting that the previous and only other time he captained a team was when he played for the Thomond under 14s.

“Through our shared vision, hard work, volunteerism, and the generosity of our sponsors, Thomond players can now train in one state of the art facility all under the umbrella of Thomond RFC.”

With spot prizes and bragging rights replacing silverware and league points, the people of Limerick can be part of another great Thomond night to remember, safe in the knowledge that their contribution towards this event will have a positive impact on the club’s future. 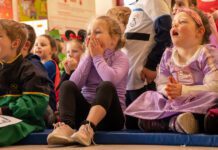 Parteen pupils had more than a million reasons to celebrate